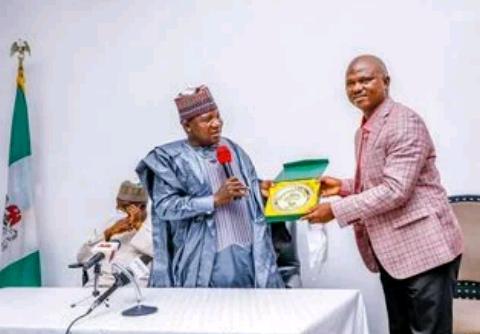 The Management of the National Commission for Persons with Disabilities has paid a visit to Plateau State Governor Simon Bako Lalong to appreciate his passion for people with disabilities in Plateau State and the nation as a whole.

Led by its Executive Secretary Mr. James Lalu, the Commission said it was highly appreciative of the role played by the Governor towards the establishment of the Agency, having worked for its establishment in Plateau State while he was Speaker of the Plateau State House of Assembly.

Lalu said the Governor has also matched words with action in recruiting people with disabilities to manage the Commission in the State unlike the situation in many States where these category of persons are marginalised.

The Executive Secretary said Governor Lalong has also appointed persons with disabilities into his cabinet as well as ensured that others are carried along in all empowerment and entrepreneurship programmes.

Responding, Governor Lalong expressed gratitude to the Commission for recognising his modest contributions towards addressing the challenges of people with disabilities.

He said his passion for people living with disabilities is deep as he believes that anyone can be in the situation they find themselves.

” I always put issues around people living with disabilities on the highest priority. We all know that no one became disabled by his own choice. For some, they were born like that and for others, they became disabled later in life. That is why those of us who are physically able should not discriminate against them or consider them less human beings. A lot of them have special gifts that surpass those of us who consider ourselves able” he said.

Governor Lalong therefore called on other State Governments who have not established such Commissions should go ahead and do so without further delay to be able to address the plight of these category of people.

He assured the Executive Secretary of the National Disability Commission of his support for ensuring he succeeds in this assignment.

They presented a cake to the Governor to mark his 58th birthday.