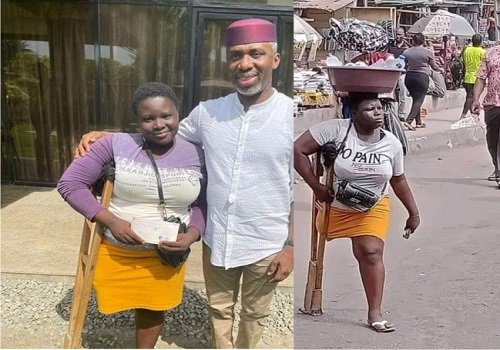 SIR: It is not an uncommon sight to see Nigerians with disability both male and female trying to eke a living from hawking items on our dangerous roads. Due to their physical disability most of the goods they hawk are often light-weight items such as sweets, handkerchiefs and so on.

However, the condition of Mary Daniel, a 27-year-old amputee hawker with one-leg choosing to sell water in the ever busy and dangerous Lagos traffic cuts an even more pathetic sight. Her physical disability, the condition in which she is trying to survive and her sad background story have evoked an outpouring of sympathy and help from Nigerians all over the world.

Nigerians in general are a kind-hearted people, however it is unfortunate that the nation finds itself in the current state it is in because of the wickedness of the leaders Nigeria has had who prefer to squander and greedily steal the country blind to the detriment of the citizens.

Things have become so hard in the nation that irrespective of one’s physical condition, one must struggle in order to survive. Begging which used to be considered a shameful act has now become a “profession” which even individuals without any physical disabilities engage in.

I was saddened when I read the pathetic story of Mary Daniel, the 27-year-old amputee hawker and it is disheartening to find out that someone with her physical disability has to take to the streets in order to eke a living for herself, a young baby and an aged grandmother.

I wonder what our governments at all levels – federal, state and local are doing to assist citizens who find themselves in such difficult situations. While it is true that some professional beggars will choose to run away from government approved rehabilitation centres because they make more money being on the street where they constitute nuisance and embarrassment, yet our government has not been doing enough to educate the public on their various interventions if any.

It is imperative for our government, especially at the state and local government levels to place priority on welfare of their citizens and to come up with sincere programs to get destitute off the streets.

Thankfully, Nigerians have risen together to give Mary Daniel hope and a new lease of life with a donation of over N25 million already raised for her to start a business.

The Lagos State government has also helped in putting together a committee comprising a non-governmental organisation, Irede Foundation, a lawyer from the state Ministry of Justice and a social worker from the Ministry of Youth and Social Services to help her plan how to set up her own business.

It is somewhat saddening though that the young lady had to fabricate some untruths about her background as a way of eliciting sympathy but this is an eye opener that a lot still needs to be done to cater for the welfare of Nigerians.

We should reduce cost of governance to accommodate people in need as there is too much wastage in Nigeria.

Our leaders should show some empathy and behave humanely because vanity upon vanity, all is vanity.

Physically challenged man got married to a beautiful bride

Meningitis: 50% of patients will die if untreated – NCDC