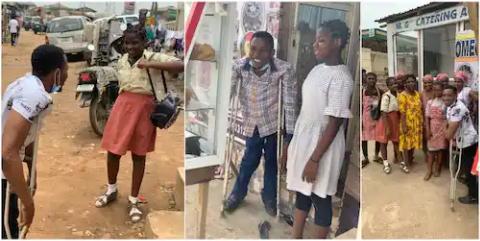 A physically challenged Nigerian man identified as Michael Showunmi has been commended on social media for enrolling a schoolgirl in a catering school.

The young man said the schoolgirl named Ajibola Eniola is an orphan whose school fees his foundation has been paying since 2020.

After being asked what skill she would like to learn, Eniola said she preferred catering and baking. Showunmi’s foundation received help from good Samaritans and Eniola was enrolled in a catering centre.

According to the young man, the chief baker at the catering centre gave them 46.1% discount because she is a widow that loves empowering children.

She has been enrolled for two years and will be finishing her secondary school education alongside her skill acquisition training.

​An Encounter With A Deaf Man Using An Envelope to Solicit...