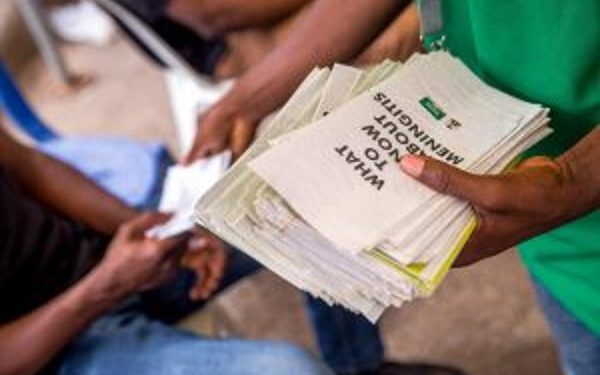 The Nigeria Centre for Disease Control (NCDC) says 50 per cent of meningitis patients will die if untreated.

Dr Pricillia Ibekwe, the Director of Special Duties and Technical Lead for the National Cerebrospinal Meningitis Technical Working Group of NCDC, made this known during an awareness walk to mark the 2021 World Meningitis Day.

The News Agency of Nigeria (NAN) reports that the World Meningitis Day is marked on April 24.

The 2021 edition had the theme: “Take Action to Defeat Meningitis”.

NAN reports that the awareness campaign was held by the NCDC at Utako Market in Abuja.

Meningitis is an infection that causes inflammation of the protective membranes covering the brain and spinal cord.

Pathogens mostly viruses and bacteria can cause meningitis.

Bacterial meningitis can be fatal and survivors of the illness can be left with long-term disabilities such as deafness, loss of limb, loss of sight or brain damage.

Ibekwe said that the disease could be transmitted from person to person.

“The sad thing about meningitis is that it is a race against time, and 50 per cent of people who have meningitis will die if untreated,” she said.

She advocated after-care services to tackle meningitis in the country.

She disclosed that Nigeria planned to drastically reduce the rate of meningitis infection.

According to her, meningitis cases have been found to occur through the year in Nigeria with an observed increase during the dry season.

“The disease is highly contagious and can kill within 24 hours.

“The most recent large scale meningitis outbreak in Nigeria occurred between December 2016 and May 2017, according to our data.

“A total of 14,280 suspected meningitis cases were reported across 23 of the 36 states.

“The two main causes of meningitis are viruses and bacteria which may cause infection in a part of the body and then spread through the bloodstream to the nervous system,” she explained.

She acknowledged that the country had not done much in reducing meningitis compared to other vaccine-preventable diseases.

Ibekwe said efforts were ongoing to reduce the number of meningitis cases by at least 50 per cent.

“We have nine years to go to make sure we kick out meningitis globally especially in Africa because we know that over 50 per cent of the global burden of meningitis is in Africa.

“Through the global strategy, we plan to reduce to the barest minimum, outbreaks of meningitis.”

She added that plans were ongoing to develop comprehensive services in health, linked to the education sector, social service and other sectors, to ensure great support around survival from meningitis.

In his remarks, the Head of Risk Communication at the NCDC, Mr Yahaya Disu, said meningitis was still endemic in the country because those affected did not understand the roles they needed to play.

Disu said policymakers would have a significant role to play in the eradication of the disease.

“Issues of hand hygiene and other things are personal things that people need to do, but when it comes to vaccination – making it available and accessible – are the role of policymakers.

“They need to ensure equitable access to what is available to prevent and cure meningitis, empower facilities, train healthcare workers and provide the necessary drugs,” he said.

According to him, when disability occurs, there must be rehabilitated mechanisms to ensure that those who suffer the disease, suffer minimal disability.

“We must be able to reintegrate them back into society for them to optimise their potential.”

NAN reports that cerebrospinal meningitis is endemic in many parts of Africa including Nigeria.

While outbreaks of meningitis can occur in any part of the world, the largest of these occur mainly in the semi-arid areas of sub-Saharan Africa, designated the ‘African meningitis belt’.

Meningococcal meningitis occurs worldwide but the highest burden of the disease is in the meningitis belt of sub-Saharan Africa, stretching from Senegal in the west to Ethiopia.

The rate of incidence of the disease within this region is high; around 30 000 cases are still reported from this area annually.