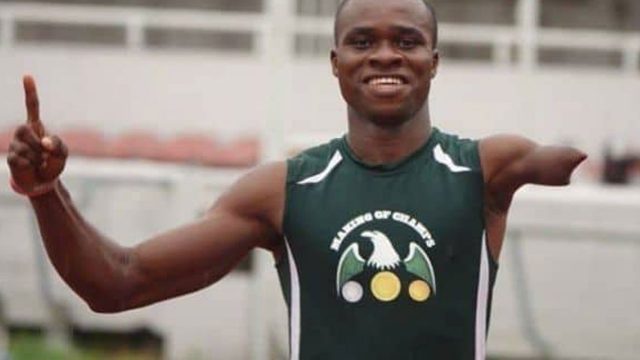 At Atlanta ’96 Paralympics, Ajibola Adeoye made the country proud by winning a gold medal on the track. He died in 2011 as an unsung hero. Since the demise of Adeoye, the country has not done well in the event.

The wait may be over this year if Ifeanyi Christian achieves his dream of putting smiles on the faces of Nigerian at the Paralympics in Tokyo.

Christian is Nigeria’s fastest para-athlete in the T46 men’s 100m, 200m and 400m, and he is aiming to be the country’s new Paralympic champion on the track after Adeoye. He has made history as Making of Champions (MoC)’s first Para-Athlete.

Christian was not born with a disability, though. Instead, he had to adjust to it at the age of 10 when he was involved in an accident that affected one of his hands. Most people would have been deterred, but Christian has continued to push for survival.

He began to immerse himself in sports as a way of proving to the entire world that there is ability in disability. But things became difficult for Christian at some stage and he was at the verge of giving up.

Narrating his journey into athletics, Christian said: “I went to visit my aunt at her shop in Akwa Ibom when this lady (Idongesit Asuquo Daniel) saw me and called me. She asked me if I could run. I told her I could, so she introduced me to a coach immediately. That was the moment I started out professionally.”

Two months after he started training as a para-athlete, Christian had his first major competition at Eko 2012 National Sports Festival in Lagos. He was drafted into Akwa Ibom team for the Sports Festival, and competed with his bare feet in the build-up to Eko 2012.

He got to use a pair of spikes for the first time at the festival and was able to give a good account of himself at the competition, winning a silver medal in the 200m men’s T46 event.

He has encountered some frustrations along the line. Despite being the best athlete in the T46 100m, 200m, 400m categories at the 2018 Commonwealth Games trials in Abuja, Christian was not selected among the final list of athletes to Gold Coast.

“Actually, Commonwealth Games wasn’t the first,” Christian said on his ill-luck with national team trials. “My first national trials were in 2014. I won but I wasn’t selected for the tournament, which was in Dubai. I didn’t give up. Then in 2015, at the Africa Games Trials, I also won the 400m event and I was dropped for the person who emerged second behind me,” he said.

Christian got a bit of respite when he became the first para-athlete to join Making of Champions Track Club (MoC) in 2019, the biggest track club in the country.

His movement to MoC grants Christian access to training under the tutelage of Olympics medallist coaches Deji Aliu and Glory Alozie.

The coaches are working round the clock to ensure that Christian’s talent is harnessed so that he reaches the pinnacle of his career.

Christian made the country proud on his international debut, winning three gold medals for Nigeria at the World Para Athletics Grand Prix in Tunisia, where he dominating the men’s 100m, 200m and 400m in the T46/47 class.

Christian says the Tokyo Paralympics will be an opportunity to write his name in gold.

Founder of MoC, Bambo Akani, captures the grass to Grace story of Christian in a message to The Guardian thus:

“Ifeanyi Christian epitomizes the latter, and in the harsh realities of competing as a para-athlete in Nigeria, the sprinter has been able to surmount most of the hurdles he has had to face.

“Ifeanyi Christian has used his challenges as a stepping stone to greater achievements in his athletics career.”

According to Akani, Christian, a native of Imo State, threw himself into sports and his efforts started paying off in the early parts of the last decade. “In that time frame, he has gone on to become Nigeria’s best athlete in the T46 100m, 200m, and 400m categories. Athletes in the T46 category have a single below or above the elbow amputation.