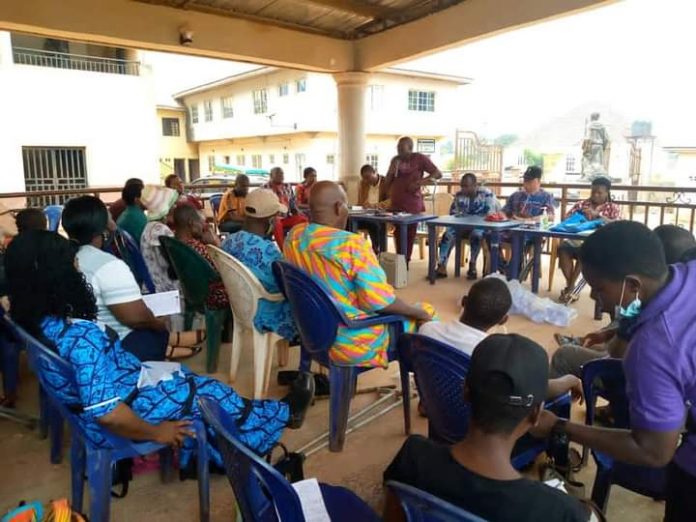 The Joint National Association of Persons with Disabilities (JONAPWD), Anambra State chapter has announced plans to empower three of its members along with set targets for the 2021 calendar year.

The State Chairman of the Association, Ugochukwu Okeke revealed this at the association’s first general meeting for the year 2021. The meeting was held at St Mark’s Catholic Church, Abagana.

Okeke thanked Anambra State Government and Office of the Governor on Disability Matters for the recent employments given to Persons With Disabilities in the State. He congratulated the beneficiaries while tasking them to give the best of services at their various duty posts. He also assured those still seeking employment not to loose hope as efforts are been made to put smiles on their faces.

He appreciated the Hon. Commissioner for Women Affairs Lady Ndidi Mezue for financially assisting JONAPWD in the registration process of the women wing of the body with her ministry as an NGO along with a token sum of #500,000 donated through the ministry in fulfillment of her pledge to support the programmes of the association during the 2021 International Day for Persons With Disabilities.

The chairman revealed that JONAPWD has concluded plans to empower three members drawn from the three major clusters soonest.

The work plan for 2021 was also unveiled by the association at the meeting. ICT Training, Sexual / Reproductive health Seminar, Voters Education, Talent Hunt, etc are part of the plans laid out on the list.

He announced to members that the State Government has taken delivery of Covid-19 vaccine from the federal government. While thanking the Executive Governor and his team for fighting the pandemic in the State, he appealed for priority attention from the ministry of health for persons with disabilities during administration of the vaccine.

The Special Adviser to the Governor on Disability matters thanked members of the Association for coming out en mass and encouraged them to make themselves available to take the vaccine since His excellency, Willie Obiano, Executive Governor of the State has directed that special attention be given Persons with Disabilities during registration and administration of the vaccine.

Dr Ms. Ifeoma Okoro, a visually impaired member of the Association and PhD holder from the University of Ibadan commended the chairman for the giant strides so far made in steering the association’s affairs. She also appreciated Governor Obiano for all his administration has done for the Disability Community in Anambra State. She expressed joy that PWDs in Anambra has accepted their disabilities and urged them to strive to be the best irrespective of their diverse disabilities. Dr. Okoro went on to share her academic achievement of being the first visually impaired female to bag a PhD in Special Education from the prestigious University since inception.

Some two hundred members from the various Disability clusters were present at the meeting alongside past and present executives.