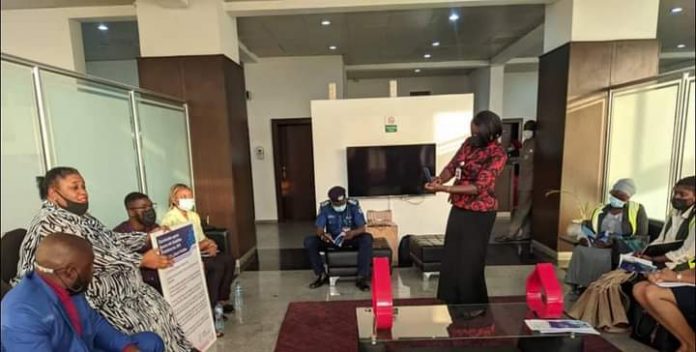 Disability Rights Advocacy Center has sensitized the Federal Airports Authority of Nigeria (FAAN) on the challenges persons with disabilities face in accessing airport facilities in Nigeria.

The sensitization was made when a group led by the Executive Director of DRAC, Dr. Irene Ojiugo Patrick-Ogbogu paid an advocacy visit to the office of FAAN on Wednesday. The visit was part of the organization’s moves aimed at implementing aspects of the Disability Act concerned with access to transportation for PWDs, with support from the Ford Foundation.

In his response to the DRAC group, the Managing Director of FAAN, Capt. Rabiu Hamisu Yadudu made firm commitments to collaborate with DRAC to ensure that the highlighted issues are strategically addressed. The FAAN boss gave immediate instructions to incorporate the group’s recommendations for accessible airports into the agency’s plans.

Patrick-Ogbogu presented the MD with copies of gazetted and simplified versions of the Disability Act, along with a picture-framed citation of Part IV (14) of the Act, outlining Government’s responsibility to persons with disabilities during air travel.

An impressed Capt. Yadudu instructed that the framed citation be duplicated in larger versions and put in all five international airports to raise awareness of the public on disability rights in the nation’s aviation settings.

Obiano Has Transformed Lives Of Persons With Disabilities – Ezewuzie