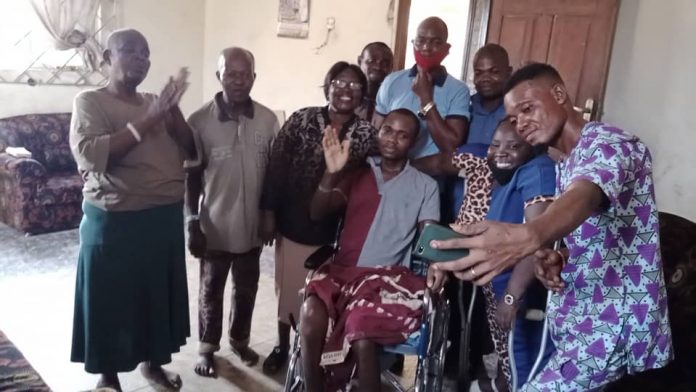 Daughters of Charity, a humanitarian initiative and NGO based in the ancient city of Benin has come to the aid of one of two Deaf victims hit by stray bullets during the recent Endsars protests in the city by donating a wheelchair for mobility purposes.

The victim, Mr. Osazee Festus, was hit at the back of his neck while waiting to be hired as an artisan at Upper Sakponba Road on October 20, 2020.

He was immediately rushed to Omosu Hospital, Erediauwa road, for stabilization before being transferred to Accident and Emergency Unit, University of Benin Teaching Hospital (UBTH). There, doctors on duty revealed that Mr. Osazee risks becoming bedridden as a result of spinal cord injuries sustained.

Earlier in January, the Edo State Governor, Godwin Obaseki, had offset the medical bills of the two Deaf victims which ran into thousands of naira.

Mr Osazee, who lost his ability to walk due to injuries to his spinal cord now required a wheelchair for mobility. Fortunately, he was visited on Wednesday by the Edo State Association of the Deaf Excos and Joint National Association Of Persons With Disabilities (JONAPWD), led by the State chairperson, Ann Ojugo to present a wheelchair donated to him by Sis Fidelia of Daughters of Charity.

Inclusive News Network learnt that the Edo Deaf Association had reach out to Daughters of Charity for help when the University of Benin Teaching Hospital could not provide mobility aid to ease the mobility of Mr. Osazee after he was discharged from the hospital.

Group To Empower 500 Persons With Disabilities With Food Items, Cash...