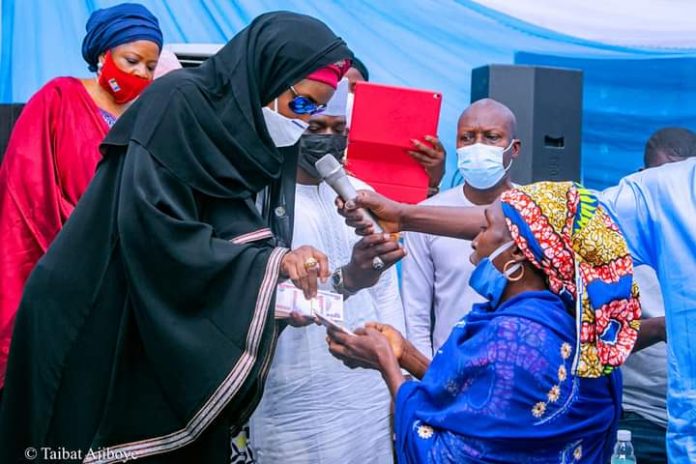 The Governor of Niger state Gov Abubakar Sani Bello has expressed delight in the disbursement of Eighty million Naira to 4,000 women in the state under the Federal Government’s Cash Grant for Rural Women programme.

Gov Abubakar Bello made this known when the Minister of Humanitarian Affairs, Disaster Management and Social Development Sadiya Umar Farouq visited the state on Saturday. The Governor stated that the Cash Grant for Rural Women will lift many women in the state out of abject poverty.

The Governor who was represented by the Secretary to the State Government Ahmed Ibrahim Matabele Alli said that the Grant came at a time when the people of Niger state have been impoverished following incessant banditry attacks which has forced many people to relocate to IDP camps, rustling and lately the Covid19 scourge.
He said that he is optimistic that the women will use the grant to improve their livelihoods.

“I thank Mr President for this initiative of empowering rural women all over the country through this Special CashGrant. We are grateful for all the Federal government interventions given to the state especially during the floods, banditry, Conditional Cash Transfer, GEEP, N-Power and the Home Grown School Feeding Programme amongst others. We still need more of the intervention in Niger state. Our people have been further impoverished following insecurity caused by banditry, rustling and other social issues. However, I can assure you that these women will make maximum use of this cash grant given to them”.

Earlier, Minister Umar Farouq stated while flagging off the programme in the state, that the cash grant was part of the social protection programmes of President Muhammadu Buhari’s government aimed at uplifting the most vulnerable groups out of poverty.

“Your Excellency, as part of efforts of the Government to eradicate poverty and hunger across the country, it established the National Social Investment Programmes (NSIP) that enhances social inclusion and protection of the most vulnerable groups in the country and it is one of the biggest social protection programmes in Africa.

“As part of President Muhammadu Buhari’s vision to lift 100 million Nigerian out of poverty in 10 years, the Federal Government through my Ministry introduced the Special Cash Grant Programme for rural women being flagged off today. It is designed to provide a one-off grant of N20,000.00 to the poorest and most vulnerable women in rural Nigeria to increase their access to financial capital required for economic activities. The grant is disbursed to over 150,000 poor rural women across the 36 States of the Federation and the Federal Capital Territory”.

Beneficiaries of the Rural Women’s Cash Grant were selected from the 25 local government councils of the state.

THE DANGERS OF SOCIAL MEDIA FOR PEOPLE WITH DISABILITIES