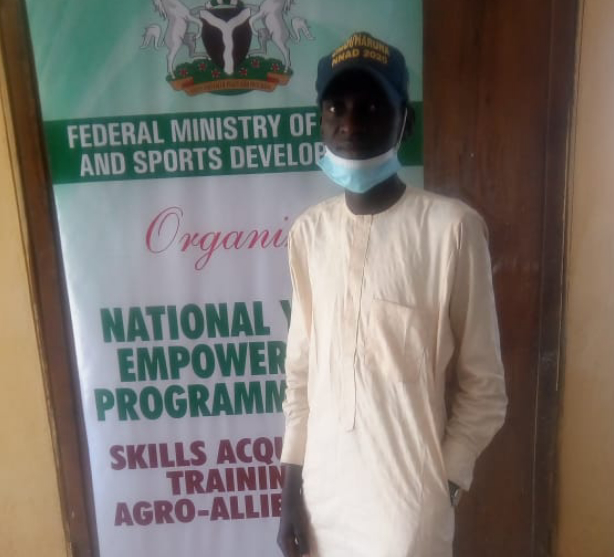 A Person With Disability, Yahaya Yusuf, has praised the Gombe State Government for including a PWD as himself in the selection process of the 2021 National Youth Empowerment Program (YEP2021) of the Federal Government.

This was disclosed in a statement made available to our correspondent on Thursday.

YEP, as part of the Federal Government’s commitment to engage youths recently received a boost with planned sustainable livelihood skills acquisition and empowerment programs in various agriculture related businesses and tailoring/fashion; a programme initiated by the Federal Ministry of Youth and Sports Development to cater for unemployed Youths in the 36 states of the Federation and the F.C.T.

Yusuf said he was happy to be among the 5 youths from Gombe State sponsored by the State government to represent the state in the capacity building programme organized by the Federal Ministry of Youth and Sports development and holding in Jos, Plateau State.

He lamented the increasing exclusion of Persons with Disabilities in the selection process of Empowerment Programs by State Governments. He observed that out of 19 Northern States selected for the Program, Gombe was the only State inclusive enough to select a person with Disability to represent it.

He said “it is unfortunate that among the 19 Northern States that sent delegates, only Gombe State included at least one Person with Disability. I don’t know about the South since Southern program is holding at Osun state.

“I am not saying what other states did is a discrimination or marginalisation of PWDs however i consider it non-Inclusion of PWDs.

“Inclusion requires one to include both youth, women and PWDs, and this is exactly what Gombe State Government did when it selected two women, three youths – one of which is a Deaf/PWDs (i.e myself). Further more, all the participants were selected from various Local Government Areas of the 3 geo-political zones of the State.
This is truly commendable. It is what we refer to as inclusion.

“If all our Governments will adopt this model of inclusion in their representations, policies, programs and appointments, etc, then discrimination/segregation of PWDs will be a thing of the past.

“While commending the Federal Ministry of Youth and Sports for this laudable initiative, I will like to specifically thank the Gombe State Government, the Hon. Commissioner, Ministry of Youth, and the Chairman of NYCN, (The mother body of our unions) Alamin Gabarin for their rational decision to ensure the selection is inclusive and include at least one PWDs.
In sha Allah I will not disappoint!” He said.

Covid: people with disabilities account for six in 10 deaths in...