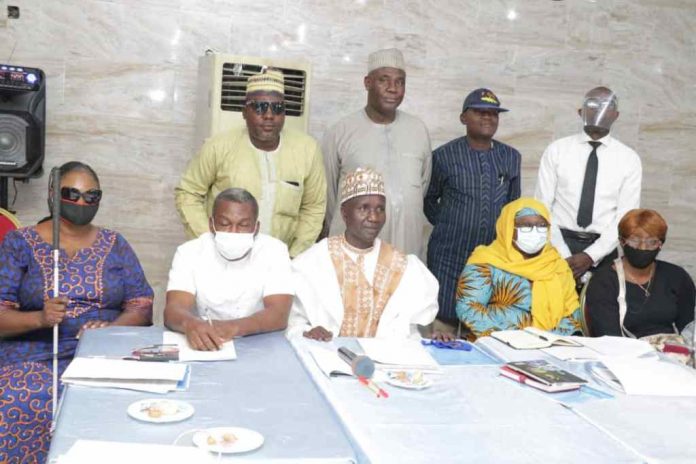 The National Commission for Persons with Disabilities (NCPD) has concluded plans for the enumeration of the growing number of persons living with disabilities in the country so as to achieve the aspiration of President Muhammadu Buhari to find a pathway to one of the final solutions to the problem of insecurity in the country.

Chairman of the Governing Council, National Commission, Hon. Hussani Suleiman Kangiwa made this disclosure during the inaugural meeting of the Board in Abuja when he spoke with journalists after the opening session of the meeting.

In response to a question that bothered on the actual number of persons living with disabilities in Nigeria, he said, “we have been using the figure that was estimated before now, but now, we think it would be wise for us to know our numbers,

“Many years ago, we were estimated to be over thirty-one million Persons living with disabilities in Nigeria and very recently, we were informed that we have been estimated to be about thirty-five million in number.

“But if we want to consider the current happenings in the country, the activities of Boko Haram and those who were victims of communal clashes that are happening across the country as well as victims of accidents, we realise that the number must have risen to about fifty million if not more.

“We are witnessing these cases where more people are being amputated, many people are losing their sight and we have many of our compatriots joining us daily due to the realities around us.

“We have the number rising daily and we do not know who will join our group next.

“So, if we know how many we are, we will know the spread of our membership and know how to take them all out of poverty so they would not be used as elements to fuel insecurity in the country

“One of the cardinal objectives of the President Muhammadu Buhari administration is to fight insecurity and that prompted him to sign the act that formed this Commission into law.

, “We, therefore, owe this country a duty to follow the implementation of the laws that established this Commission according to its spirit and letters so that the Commission would be one of the legacies the President would bequeath to Nigerians when he leaves office after his term in office ” the Chairman said.

Read Also:Okogwu demands fast track confirmation of Disability Commission; says it will lift 10,000 Persons with Disability out of poverty

When asked about what the Commission would do to curb the menace of persons with disabilities who are earning a living as beggars, he appealed to them too, “we are aware of their activities and even those who had formed associations to beg for assistance from government agencies.

“It was when we saw the need to stop such activities that we pleaded with the government to form this Commission,

“Now that we have the Commission, we want to seize the opportunity of this medium to inform them all to come under the umbrella of the Commission so that we can all reap the benefits of this Commission.

“We express our profound gratitude to President Muhammadu Buhari for giving us this opportunity and acknowledge his eagerness to leave a mark of positive development in the lives of Nigerians.

“We also commend the amiable Minister for Humanitarian Affairs, Hajia Sadiya Umar Farouq who continues to do a spectacular job of leading the government’s effort in this direction.

“Already, several programs under her Ministry have received worldwide acclamation for its impact on lives and on behalf of the Governing Council, our Commission promises to maintain this enviable standard in executing our mandate.

“In the coming days, we will set up the Governing Council to handle coordination and record-keeping of all the works of the Council.”Honourable Kangiwa maintained.

Other members of the Commission that attended the meeting that was presided over by Hon. Suleiman Kangiwa as the Chairman included Commissioner Representing the North West, Hon. Amina udu; Member Representing South

Inclusive Education will tackle problem faced by persons with Disabilities –...