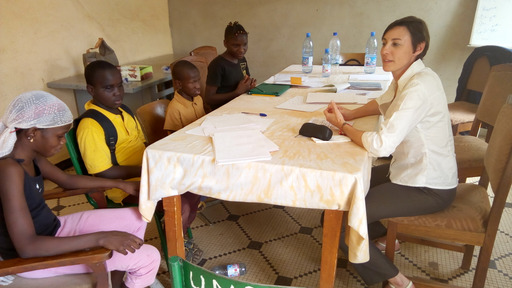 For the first time ever Bamanankan, a language widely spoken in Mali, has been translated into braille.

Bamanankan is spoken by about 80% of the population of Mali, approximately 15 million people. But despite being widely used, it has never before been translated into braille for people who are blind or severely visually impaired.

Six teachers who are blind have tested and validated the new Bamanankan code. Children who are blind, severely visually impaired, or have progressive eye conditions will now learn the new code and receive associated braille materials, enabling them to access the same educational materials as their peers. The adaptation will also allow these children to be enrolled directly in schools in their community where education is provided in Bamanankan.

The landmark project was spearheaded by linguistic expert, Dr Issiaka Ballo, assistant professor at Université des Lettres et des Sciences in Bamako, and Dr Diallo, a braille specialist at UMAV, as part of an inclusive education programme for primary school students with visual impairments. This was funded by the United States Agency for International Development (USAID) and Sightsavers, a UK-based international NGO.

Laurène Leclercq, Global Technical Lead for education at Sightsavers, said, “It is very rare to see local languages translated to braille, but it makes a huge difference to ensuring that children are included in education and that people have access to their own culture and expression. We are incredibly proud of this work and plan to continue working with partners to make education in Mali accessible to all.”

As a result of Bamanankan being translated into braille, children with visual impairments can now take part in educational milestones from which they were previously excluded. The first focus will be on adapting the national early grade reading assessments (EGRA) into Bamanankan braille. This will mean these children can sit the same reading test as their peers. Once the children have sat the test, their teachers will be able to analyse their test results in order to identify their literacy needs and develop strategies to meet these needs.

Dr Ballo explained, “The first impact I saw from the teachers and students is their rapid ability to write Bamanankan in braille. The second is the students would keep on saying that they discovered now that it is possible to write in their own language with braille.”

At present, over 500 students who are blind or severely visually impaired are enrolled in special schools in three of Mali’s main cities. In the future, an increasing number of these children will be educated in mainstream schools. It is hoped that the translation will lead to many more texts being transcribed into braille and made available for these children. The government has provided funds to support this process.

The work was a joint initiative involving the Université des Lettres et des Sciences in Bamako, the University of Birmingham in the UK, the Malian Union for the Blind, and Mali’s Ministry of Education. It was commissioned in 2017 as part of a USAID funded inclusive education project for primary school children with visual impairments in Mali. This project has strengthened education in the country by providing training for over 300 teachers, school administrators and ministry officials in inclusive education so that they can help visually impaired students. It has also provided educational resources to 212 children with visual impairment in four regions of Mali and developed a teacher’s guide on pan disabilities.

ALDIN Demands Immediate Redress of the Disqualification of a Visually Impaired on Ground of Disability.