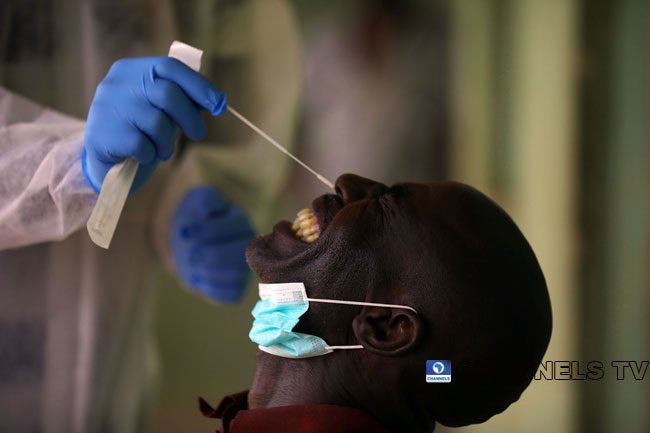 File Photo: A man reacts as a medical worker takes a swab from his nose during a community COVID-19 testing campaign in Abuja on April 15, 2020. Sodiq Adelakun/Channels TV

Nigeria has recorded 27 new deaths from the coronavirus, even as the country recorded 1,114 fresh infections on Friday.

This was disclosed in the report published by the Nigeria Centre for Disease Control (NCDC) in the early hours of Saturday.

The new cases were recorded in 21 states and the Federal Capital Territory, with Lagos still leading with 408 new infections.

As the virus surges on and calls for more testing intensify, the country is also looking to secure vaccines as soon as possible.

As of Thursday, the Minister of Health, Osagie Ehanire, said Nigeria had secured an additional 41 million doses of COVID-19 vaccines.

However, the delivery date for the vaccines remains unknown as manufacturers struggle to meet global demand in time.

The 41 million doses were secured as part of efforts by an African Union task team to help countries on the continent gain equitable access to vaccines.

Also, Secretary-General of the United Nations, Antonio Guterres said Thursday that conscious efforts have to be made to ensure that vaccines get to everyone.

Shortly after receiving his first dose of the COVID-19 vaccine in New York City, Guterres said the world must come together if progress is to be made.

Globally, at least 2,191,865 people have died from the virus since the outbreak emerged in China in December 2019, according to an AFP tally from official sources.

The number of deaths globally is, however, said to be underestimated as the toll is calculated from daily figures published by national health authorities and does not include later revisions by statistics agencies.