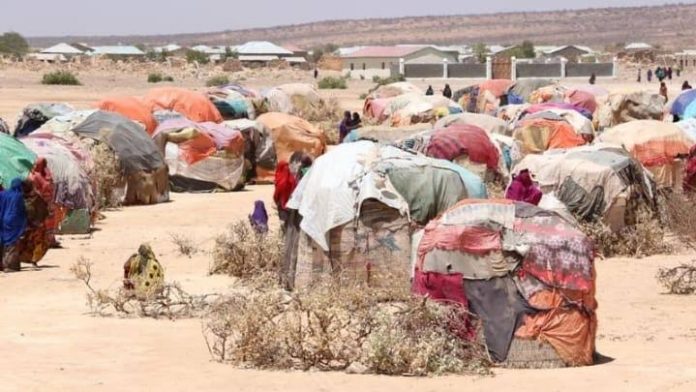 No fewer than 5,000 unprofiled Internally Displaced Persons, IDPs, have been discovered in makeshift camps located at Tse Yandev in the North Bank area of Makurdi town.

When Vanguard visited the camp on Monday, it was discovered that the majority of the IDPs who moved into the community less than a month ago, without the consent of the state government, slept in the open. Some used palm tree branches to make coverings while women used their wrappers as the curtain.

It was also, observed that they constructed local bathrooms made of Palm tree branches, while toilet facilities were also lacking in the camp.

One of the displaced persons Mrs. Ukuma Jooji who disclosed that she hailed from the Kasevo council ward in Guma Local Government Area, LGA, said they had been there since December 2020.

According to her, she was displaced after an attack by suspected herdsmen on her community during which she lost her son.

Chairman of the camp John Azenda disclosed that they moved to the location in December 2020 after being evicted from a makeshift camp located near 72 Army Battalion in the same North Bank.

“The Makurdi LGA chairman, Tony Idyege told us that he wanted to build a market and he asked us to leave. He told us to move over to this place. I am from the Uvir council ward in Guma LGA and I have found it difficult to resettle as my village and even compounds have remained completely deserted.

“We are over 847 households,1000 children, 10 elderly persons. The State Emergency Management Agency, SEMA, promised to assist us. We are waiting and also appeal to the Federal Government to help us rebuild our destroyed villages as they promised long ago to enable us to go back to our ancestral homes.

“Some individuals came around to give some materials. There is no water or any amenities here but thank God we have not recorded any outbreak of illness or deaths,” he said.

When contacted the Executive Secretary of SEMA, Dr. Emmanuel Shior said his office was mobilizing to send relief materials to the IDPs adding that the government also intended to collaborate with ActionAid as well as Doctors Without Borders to provide shelter and water for them.