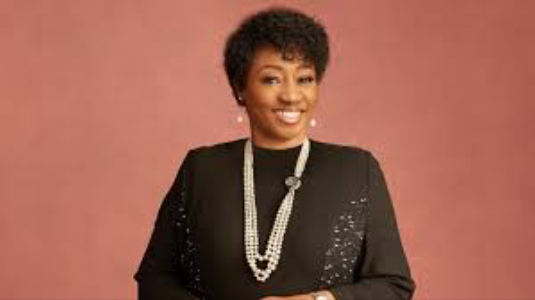 The Wife of Ekiti State Governor, Erelu Bisi Fayemi has assured people with disabilities in the State of equal participation and opportunities in Dr Kayode Fayemi’s administration.

Speaking at an emergency meeting with the Association of People with Disabilities, Ekiti state chapter, in her office on Monday, Erelu Fayemi who allayed the fear of marginalisation expressed by the group, said government will give special consideration to them in line with laid down rules and regulations.

The meeting was sequel to a protest by the group last week in Ado- Ekiti.

The First Lady said Instead of having a private meeting with members of the group, she decided to bring them to a round table meeting with top government officials that can address all their issues.

The group is demanding among others, the implementation of the policy which ceedes 5% of employment to People with Disabilities. They contended that judging from the last recruitment exercise done in the state, the policy was set aside.

The spokesperson for the group and Chairman, Joint National Association of Person with Disabilities (JONAPWD), Mr Owolabi Kayode who pointed this out, also cited examples of slots of employment given to people from the group in 2014 by Dr Kayode Fayemi during his first term in office.

The group also demanded for more inclusion in empowerment programmes, business schemes and the need for special attention to be given to the schools for people with special needs in the State.

Erelu Fayemi reiterated that every disabled person has an able part which makes him/her employable, adding that the State Government is passionate about them and will ensure they are gainfully employed.

Erelu Fayemi enjoined the leaders of the group to educate and inform members on procedures for employment, so as to enable them benefit from opportunities within the public service.

She also advised them to consider making use of the well equipped skills acquisition centre for people living disabilities in Ado-Ekiti.

She explained that the centre remains one of the best of its kind in the country and well equipped to help them become skilled in different fields.

She added that the government will ensure they get financial support to start off their businesses after the completion of their programmes at the centre.

The First Lady also urged heads of agencies present at the meeting to create People with Disability desks in their various agencies. This, she said will make the group feel more included in government policies.

In her response, the State Head of Service, Mrs Peju Babafemi said the state government will work more in the inclusiveness of people living with disability in the employment process as well as other areas that they can benefit from in the administration.

She reiterated that the present administration is carrying everyone along in its policies.

Also speaking, Chairman of the state Civil Service Commission, Mr Olubunmi Famosaya explained that following procedures is important in recruitment, stressing that only few people with disabilities applied in the last recruitment exercise. He added that special considerations were given to them and queries addressed to his office were treated effectively.

“There is no record of anyone with disability coming to our office, we have limited space for vacancy but we are passionate about gender and disability,” he explained

The President of the Association, Owolabi Kayode thanked the First lady for allaying their fears and giving ears to their plight.