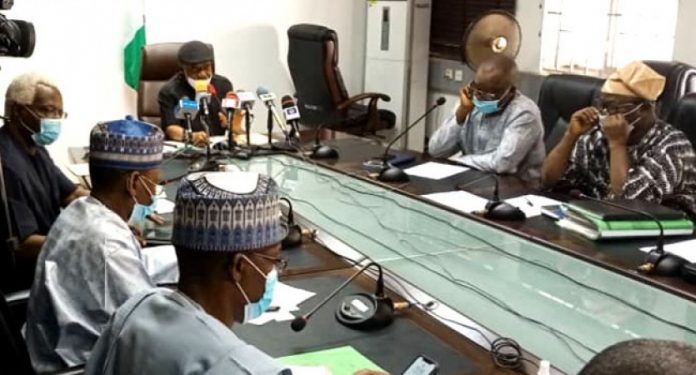 •FG and ASUU negotiators at work

The Federal Government has offered a cumulative sum of N65 billion to the Academic Staff Union of Universities (ASUU) to address earned academic allowances and revitalisation of universities.

Minister of Labour and Employment, Dr Chris Ngige, made the proposal on behalf of the government to the striking lecturers when they met on Friday in Abuja.

Briefing reporters at the end of the meeting, he described the negotiation as fruitful as the government has decided to shift grounds on the lingering issues that have kept students out of the classroom for several months.

Ngige noted that in its bid to resolve the impasse with ASUU, the sum of N15 billion from the amount offered by the government would be for more funds to revitalise the universities.

He explained that the fund was in addition to the N20 billion paid earlier, making it a total of N35 billion committed as revitalisation fund by the government.

The minister gave an update on the visitation panel to the universities, noting that the panel would be inaugurated next week.

He also spoke about the payment system, as the union had rejected the Integrated Payroll and Personnel Information System (IPPIS) of the government.

Ngige noted that representatives of the government and ASUU met over the University Transparency Account System (UTAS) proposed by the union, but it was work in progress.

He stated that the Ministry of Labour and Employment, as well as the Ministry of Education, would use the previous payment platform of the government before it introduced IPPIS to pay the withheld salaries of the lecturers under strict monitoring.

The ASUU president, who also addressed reporters, acknowledged that the government has made some new offers to the union and some progress has been made.

He, however, said the union leaders would report to their organs and get back to the government on the position of their members.