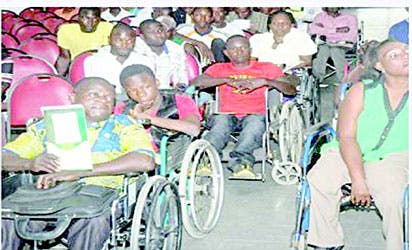 International Committee of the Red Cross (ICRC) plans to rehabilitate 2,000 persons with physical disability patients at the newly inaugurated Physical Rehabilitation Centre (PRC) in Maiduguri in the next two years.

The ICRC Head of Delegation in Nigeria, Mr Eloi Fillion, made this known at the inauguration of the first PRC, located at University of Maiduguri Teaching Hospital (UMTH) on Thursday.

The News Agency of Nigeria reports that the centre was virtually inaugurated by President Muhammadu Buhari, along with other landmark projects at UMTH.

Also on ground was the Minister of Health, Dr Osagie Ehanire, who physically inaugurated the PRC on behalf of the President.

The ICRC head of delegation said that the PRC was constructed in collaboration with UMTH to provide the much-needed physical rehabilitation services for people with disabilities to regain their mobility.

He added that “it is expected that the centre will receive 90 patients per month during the first months and should have attended to some 2,000 patients by 2022.

“In addition, ICRC will fully support the centre for two years and then hand it over to UMTH.”

According to him, the newly constructed centre will provide artificial limbs – prostheses and orthosis, physiotherapy sessions and walking aids such as the zimmers frame and wheelchairs.

“The ICRC will provide technical and material support to 34 healthcare professionals, including nine orthopedic technologists, who are completing their training in Tanzania and Lagos under ICRC scholarships.

“Six of the centre’s employees are physically challenged too,” he said.

Fillion, however, said that the ICRC started assisting physically challenged people in Nigeria since 1979.

He explained that “before today, people with physical Disability from Borno and surrounding states had to undertake long and often difficult journey to Kano for physical rehabilitation services.

“The ICRC is the world’s largest provider of physical rehabilitation services in developing and fragile countries including countries experiencing armed conflict.

“In Nigeria alone, 314 people were fitted with artificial limbs through the ICRC Physical Rehabilitation Programme in Kano in 2019.

“Thankfully, with the establishment of the Physical Rehabilitation Centre here, we will be reaching a lot more people.’’

He thanked all who contributed toward achieving the feat, especially the Federal Government and citizens of Borno “for their warm reception of the ICRC and our humanitarian interventions.

“Assisting and protecting lives affected by armed conflict and violence is always a collective effort; I strongly believe that this centre will demonstrate that in the years to come,’’ Fillion said.

The World Health Organisation (WHO) Representative to Nigeria, Dr Walter Mulomba, congratulated the Federal Government and Borno Government for the landmark achievement.

He said the projects inaugurated demonstrated government’s commitment to boost healthcare delivery in the state.

The representative expressed optimism that the inauguration of Trauma Centre at UMTH would help the state to provide services for people affected by the insurgency.

Mulomba assured continued support of WHO to deliver better healthcare services in the state and the country at large.

Highlight of the event was the tour of the PRC by the minister of health, in company of the Borno Governor, Prof. Babagana Zulum, the Chief Medical Director of UMTH, Prof. Ahmed Ahidjo and Mr Eloi Fillion, the ICRC Head of Delegation in Nigeria.

The PRC has a manufacturing unit for production of orthopaedic prosthesis for the persons with physical Disabilities, fully equipped and furnished with a hostel, water and electricity supply.

NSGF set to inaugurate James Lalu as head of committee on...