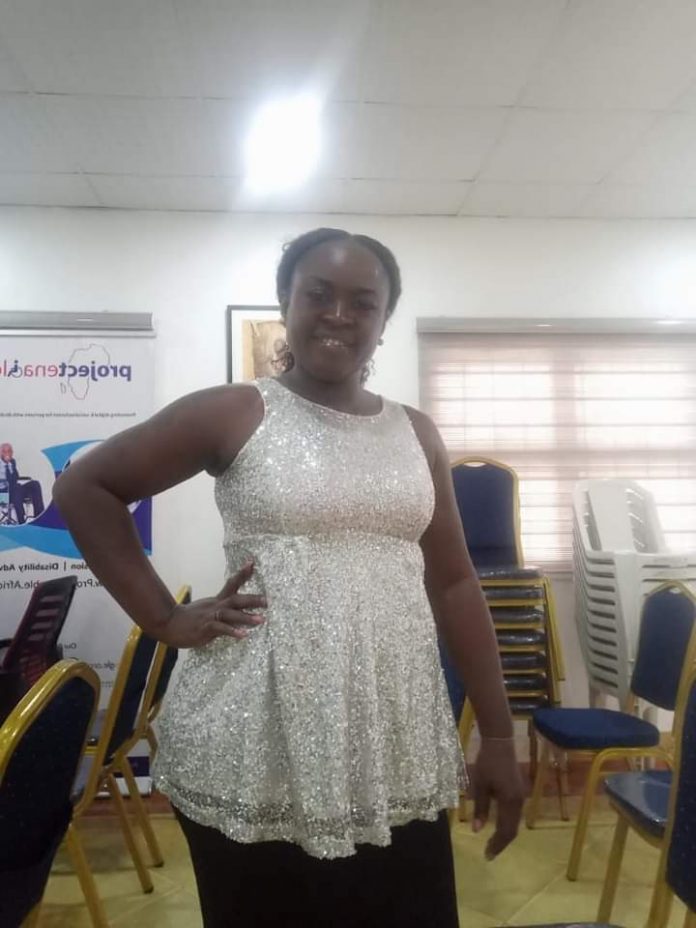 Maryanna Izuegbunam (Ijeoma) is a Graphic Designer. She runs an online training both in graphic design, animation and white keyboard. She is a native of Nnobi in idemili south local government area, Anambra state. She is the last child of her parents.

Ijeoma is also an entrepreneur who deal as a nail technician and hair dresser. She is an Assistant Secretary General of Deaf Supporter Development Initiative (DSDI) and also General Secretary of Lagos Mainland Deaf Association (LMDA).

Meet Ijeoma as she shares her story to encourage others

JOURNEY INTO DEAFNESS
My journey into deafness began as a fallout of appendix surgery. From age ten, I lived with a family member (my sister). She subjected me to a lot of maltreatment. Hunger became a regular accomplice despite heavy labour which involved hawking goods for her. On a particular day, I was seriously famished while hawking coconut and corn, I had no choice than to eat from the coconut I hawked. Following which I became unconscious and it led to immediate hospitalization. At the hospital, an appendix surgery was carried out on me. However, the sister I was staying with didn’t carry my parents along until after the surgery was completed. This infuriated my parents and immediately withdrew me from her care and I returned home with my parents.

Some weeks after my arrival at home, my digestive system was refusing every food intake. As a result, my parents took me to another hospital. Upon thorough checkup, it was discovered that my intestine was not in the right position, therefore, another major surgery was recommended. Unfortunately, serious complication arouse from this second surgery. My hair fell off and blood was coming out of my ear, nose and throat. The development left everyone perplexed, even medical doctor. I was returned to the theatre and worked on.

The following day after I was discharged from the hospital, while my sister was cleaning my body, the suture gave way, my intestine pulled out and I fainted. I was immediately rushed to the hospital. I went into coma for almost four months. With much agony, my parents interceded for me. To the glory of God, I came back to life again. Gradually, I recuperated.

When I was eventually discharged from the hospital, it was discovered that I was no longer hearing. After a while, my parents took me to an Otolaryngologist at the hospital. There, it was explained to us that the injection given during the surgery was very destructive and it led to the hearing loss with no remedy. Both myself and parents were very depressed to hear that.

After a while, I was enrolled at Rosary College, Onitsha, Anambra State. A school where both Deaf and hearing students attended. I was able to acquire sign language skill and develop verbal communication simultaneously. After my secondary education, I proceeded to Federal Polytechnic, Oko, Anambra State where I obtained both my Ordinary and Higher National Diplomas in Public Administration.

CONTACT WITH SIGN LANGUAGE
In year 2010, I started having close rapport with other Deaf people and I learnt more about sign language from them. I was very passionate with the learning. I acquired the book called Joy of Signing to aid my learning. Two years after, I attended a Deaf church for the first time in my life. At a point in the service, they were singing one of the songs I had known prior to my becoming deaf, but in sign language. I was completely swept off my feet with the nostalgic feeling I derived from that experience. It was a surprise to me that the fingers can produce the same song the mouth is used to sing. I loved everything about the service and I became more intimate with the deaf community.

ADVICE
Being deaf is not a curse, deaf can do what hearing people are capable of, except hearing. It is all about self-confidence. There is ability in disability, everybody is gifted with special skills, being deaf doesn’t disqualify you from discovering your talents. All children with disabilities need love, encouragement and support. Such positive reinforcements ensure that children with disabilities develop a strong sense of self- worth, confidence and the determination to keep going even when things are tough.

Another Christmas Gift To The Disability Community

NDLEA’s Recruitment Of PWDs: An Example That MDAs Should Emulate

Disability Act As A Pride Of President Buhari’s Administration