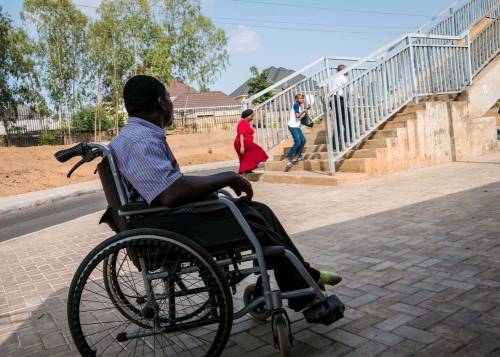 As the effect of the virus bites hard, the government stepped in to cushion the effect by providing palliatives to citizens.

The outbreak of COVID-19 in Nigeria like in other countries, brought the nation to its knees as all sectors of the country were halted. From agriculture to economy down to sports, the outbreak of the pandemic continues to affect every single person but in different ways.

As the effect of the virus bites hard, the government stepped in to cushion the effect by providing palliatives to citizens.

The Nigerian Government claimed to have spent billions of naira in palliatives distribution across the country. Despite this spending by the government, People with Disabilities have continued to lament their non-inclusion in the programmes as well as not carrying them along in the post-COVID-19 plans and information.

Assessing the palliatives programme, a joint report by civil societies revealed that the aid was hijacked and diverted by politicians.

A survey was carried out across Lagos State and one of the respondents of the survey claimed that a lot of the palliatives came from the NGOs, private organisations and individuals and they are more than what the government shared.

Recounting how they were affected by the virus, PWDs said despite being the most vulnerable to the outbreak, they did not receive any help from the government.

Ada, a special needs lady, said she had to rely on help from family members during the lockdown to survive.

She said, “Several measures have been taken since the outbreak of the virus but less consideration was given to us as people with disabilities and we are the most vulnerable in the society.

“While I could not go to my work and had no money coming in, I had to rely on assistance from family and friends.

“The government said they shared food materials but we only heard about them in the media.”

Lanre, a resident of Ketu, a Lagos suburb, who works as a cobbler despite his disability, said patronage dropped significantly, forcing him to to close his shop till the government fully opened the economy.

He said, “When I did not get palliative from the government, I was relying on the money I had saved.

“When it finished, I went to open my shop but nobody patronised me for about a month and had to close it until now that everybody is coming out.

“During that period of lockdown, feeding and paying bills was hell for me because I do not have anybody to meet for assistance and my family had to eat.”

Condemning the palliatives distribution process, CSOs in the country noted that the major problem was the inequality in the distribution of the relief materials.

CSOs noted that some clusters got more than others while the government ignored the PWD clusters.

“There were problems of distribution as some clusters got more packs than others, and the whole process became chaotic.

“There was the issue of coordinating with the PWDs. A better result would have been obtained, if there had been a relationship with the Joint National Association of Persons with disabilities, and Lagos State Office for Disability Affairs.

“Identifying who to give the palliative would have been easier if the synergy was there, synergy was clearly absent,” the CSOs said.

Suggesting the way forward on inclusivity and engagement with PWDs, President, Association for Intellectual and Developmental Disabilities of Nigeria, Mrs Joko Dawodu Omotola, said while the neglect by the government could not be described as deliberate, it should immediately move to ensure PWDs were well catered for even beyond COVID-19.

She stated that 50 PWDs from clusters were able to get support from private individuals and non-governmental organisations.

She said, “The Lagos state government was looking for ways to alleviate the sufferings of the people so what they did was to quickly give palliative but was not properly planned because I don’t expect the state to want people with disabilities to struggle with the other set of people in getting palliative.

“For stabilization, financial support is needed. Aside from finances, needs of the clusters are being considered, we have advocate groups with intellectual disabilities and there are so many in our clusters that have severe conditions that parents need to stay and sit with them before they can eat and do anything.

“It is sad to say that we are the most neglected but we have been trying to create awareness and as soon as COVID-19 is over, we can then swing into action.”

She also urged the government to push for a balance in matters concerning PWDs, adding that the government should include PWDs in its social intervention programme.

Omotola advised all state and local governments to replicate the establishment of PWD commission by creating functional offices that should be manned by the different PWD clusters at their levels to deal with the challenges facing the PWDs effectively.

Similarly, Dr Adebukola Adebayo, Chairman, JONAPWD Lagos State Chapter and Disability and Inclusive Development consultant, stressed the need for the government to give economic packages for minor and major businesses, individuals and organizations.

He added that the system has to be put in place for disability inclusion which should be by defaults from the government.

Adebayo said, “In the case of children with disabilities, does the government have the knowledge or understanding of how to cope with these children or are they building capacity for staff but as the case may be?

“I have not seen any interventions to strengthen the capacity of government officials on how to include the disabled in their interventions.

“Secondly, CBN came with an intervention to support small and medium scale enterprises in order to get their business back on tracks. There have to be lots of supportive systems from the government to buy into the products produced by the PWD’s and also to access the market easily.”

Adebayo also urged CSOs to find a way to get people’s support whether the government was inclusive or not.

This report was done with the support of the Internews