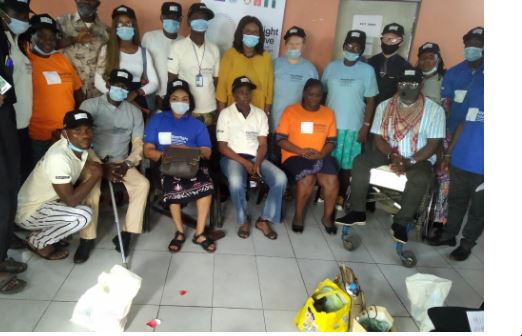 Project Alert on Violence Against Women midweek held a workshop on violence against women and girls for 60 select persons with disabilities.

The programme, a continuation of an ongoing Spotlight Initiative programme sponsored by the United Nation and European Union, is aimed at eliminating all forms of violence against women and girls globally.

Speaking, the facilitator, Josephine Effah-Chukwuma, who is also the Executive Director, Project Alert, said the essence of the workshop is not only to learn about an ongoing global campaign of intolerance to all forms of sexual and gender-based violence, but to also have them pass on the message to members of their little clusters.

Noting that persons with disabilities, because of their conditions are more susceptible to sexual violence, Effah-Chukwuma said it behoves on every enlightened individual, especially the male to look out for and protect their female members.

She also noted that persons with hearing impairment or speech disability are more prone to rape and other forms of sexual abuse, owing to their inability to communicate and tasked participants to always speak up whenever and wherever they suspect or see something going wrong.

Volunteers were selected at the end of the two-session workshop to take the message to their different communities.