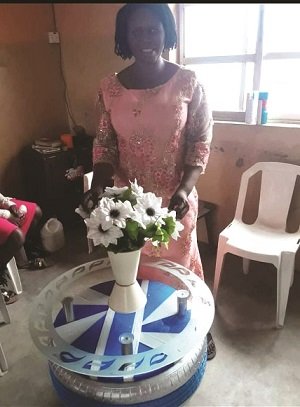 It may sound outlandish that the visually impaired trains people in arts and crafts. That is the story of 58-year-old Madam Christiana Kehinde Akinrinmade, the proprietor of Chrisken Training Centres. OMOLOLA AFOLABI reports.

The strike embarked upon by doctors at the Lagos State University Teaching Hospital (LASUTH) in 2012 is almost a decade old, but its effects on individuals and families are still up-to-the-minute. Some survived the ordeal to tell their stories.

One of such survivors is a 58-year-old visually-impaired Madam Christiana Kehinde Akinrinmade. She is the proprietor of Chrisken Training Centre; an arts and craft training centre, where she trains those who have no eye problems and the visually-impaired. She was not born with a disability. She lost her sight to glaucoma and to the strike action by doctors.

If the sight could be restored, Akinrinmade would have sacrificed all to get hers back. According to her, it was a very gruelling time for her as it was difficult to come to terms with her condition after spending some of her professional years as a top-notch practitioner in the banking sector.

Any wonder that she takes to fright any time she learns about an impending national strike, especially by doctors. Her mind would be in flux. She would begin to imagine the pains some patients would be subjected to, having had such nasty experience that led to her loss of sight.

Her visual impairment, according to her, began between 2010 and 2011. She said she was driving one day and her son drew her attention to the fact she was driving off the road. She added that but for God’s mercy, they would have been involved in a serious accident.

She thought the capacity of her eyeglass lenses was weak. She drove to the hospital to see an ophthalmologist and she was diagnosed of glaucoma. Having lost her left eye, she was advised not to drive until correctional measures were taken.

“I was advised to go for eye surgery to save the right eye. I was booked for the surgery. Unfortunately, on getting to the hospital for the surgery on the appointed date, I discovered that the doctors were on strike,” she said.

Determined not to be weighed down by her current situation, she decided to make the best out of a seemingly useless situation. Then, an idea flashed through her mind. She thought of setting up a training centre that would enable youths to engage in wealth creation by converting wastes to wealth.

That was how Chrisken Training Centre, an arts and craft training centre was established.

She said she went into the business of waste recycling in a bid to reduce, re-use and recycle wastes which will help in cutting down the amount of waste we dispose of while maintaining a sustainable environment.

Persons Living With Disabilities Empowered With Cash and Materials in Lagos