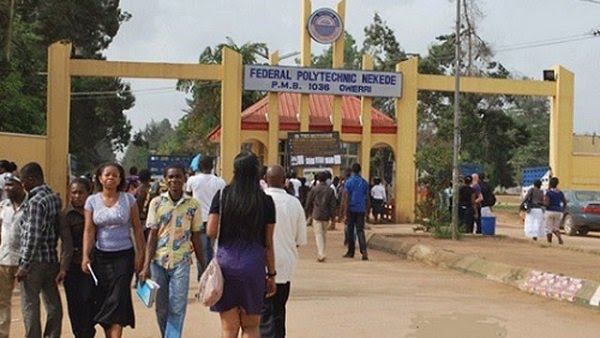 Over 30 persons with Disabilities on Wednesday barricaded the two gates of Federal Polytechnic at Nekede, Owerri, the Imo State capital, calling for five per cent employment slot.

The protesters, under the aegis of the Association of Applicants/Workers with Disability in Nigeria, prevented vehicular movements in and out of the institution.

Some of the polytechnic’s workers and visitors could not drive their cars out of the school premises while those entering could not enter the compound.

Persons with Disabilities defied the day’s downpour during the protest; some of them slept on the floor half-naked.

Speaking with newsmen, one of their leaders, Chinedu Ejiogu (aka Shekar), said they were asking for their rights, as enshrined in the Constitution, that five per cent of jobs should be allotted to persons with Disabilities.

“We learnt that the management employed about 300 new personnel into the polytechnic without consideration for disabled people. So, what happened to our five per cent?” he queried.

The school’s spokesman Everest Nwosu speaking with the protesters in company of some management workers said “I will not speak now.”

But a management worker, who pleaded anonymity, said the school authorities were not aware of the five per cent slot for people with Disabilities.

He promised to include their request when the school gets a directive from the Federal Government to employ.

It was gathered that the recent job placement was causing ripples in the school.

The Rector, Michael Arimanwa, and other management workers had reportedly been interrogated by security agencies.

This followed a petition by the Director of Intervention and Linkages, Norbert Nworie, who the Rector allegedly suspended over the disputes that arose from the employment of the new personnel, allegedly without advertisement and interview.

Your Work Is Critical In Lifting 100 Million Nigerians Out Of...