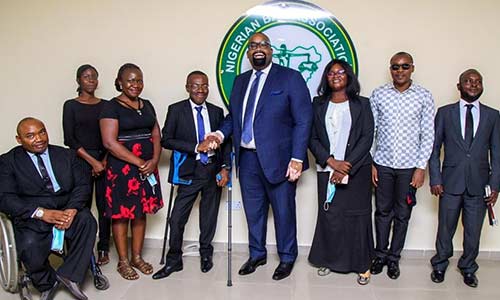 The President of the Nigerian Bar Association (NBA), Mr. Olumide Akpata has promised to henceforth involve Association of Lawyers with Disabilities in Nigeria (ALDIN) in the affairs of the NBA as he held an interactive engagement with them.

This is contained in a statement issued by the NBA Publicity Secretary, Dr. Rapulu Nduka.

“On Wednesday, the 23rd of September 2020, the leadership of the Nigerian Bar Association (NBA), met with a delegation from the Association of Lawyers with Disabilities in Nigeria (ALDIN) led by its President, Daniel Onwe to discuss issues affecting members of ALDIN.

Meanwhile, the NBA President apologized to ALDIN and noted that there would be a change towards ensuring that they are involved in the NBA administration.

“In his reaction, the NBA President Mr. Olumide Akpata, tendered an unreserved apology on behalf of the Association to all lawyers with disabilities for the neglect historically suffered by them and promised that the NBA will henceforth take steps towards a paradigm shift in the mindset of members of the NBA and the Nigerian populace at large, in their relationship with persons living with disabilities. He also pledged that the NBA will be more sensitive to the needs of not just lawyers with disabilities but also every senior citizen in the NBA.”

In addition, it was noted that the NBA will dedicate an annual event for Lawyers with Disabilities Forum (LWDF) and also, push for the amendment of the NBA Constitution to make their Chairman & Secretary part of the NBA NEC.

“The President further pledged that the NBA will ensure that the Lawyers with Disabilities Forum (LWDF) gets more active, and promised to introduce an annual event dedicated to the LWDF where issues faced by lawyers with disabilities will be discussed and solutions proffered. Also, in line with his campaign promise to make the NBA more inclusive, the NBA President promised to pursue an amendment of the NBA constitution to ensure that the Chairman and Secretary of the LWDF are made statutory members of the NBA National Executive Committee (NEC).”

In addition, the President said there will be a capacity building programmes for the Lawyers with disabilities in Nigeria.

“The NBA President further harped on the need for capacity building and promised to create specifically tailored programmes that would help to shore up the capacity of lawyers living with disabilities in Nigeria.” He concluded.

Group distributes gifts to people with disabilities in Lagos