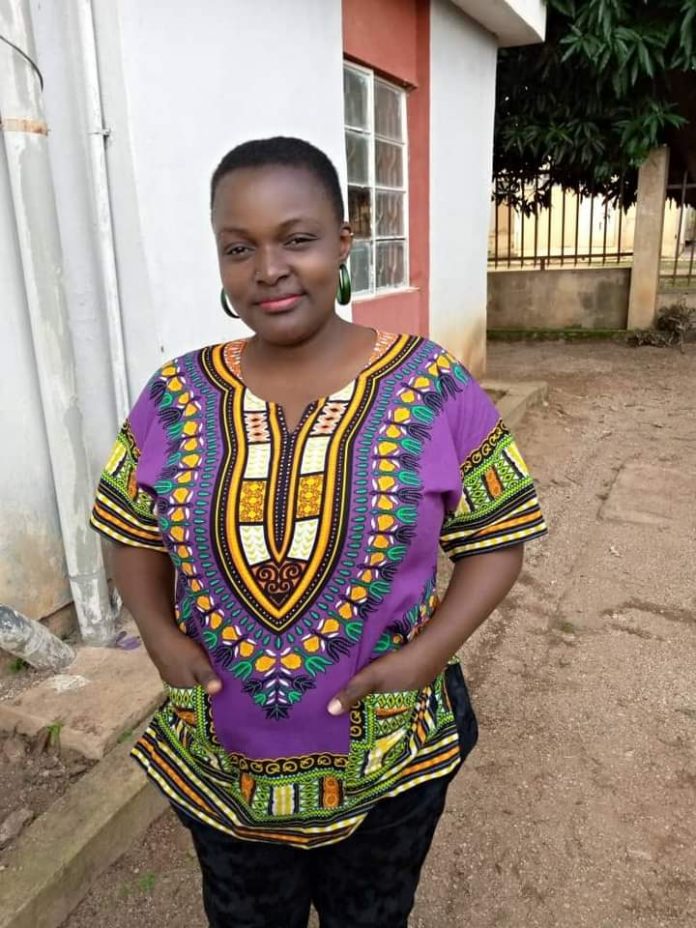 Kaneng Rose Kwandi-Adebayo hails from Kuru, Jos/South LGA Plateau State. She is the fifth child out of a family of eight. She currently works as a lecturer in the Department of Special Education and Rehabilitation Sciences, Faculty of Education, University of Jos.

Aside being a lecturer at the University of Jos she is also a doctoral student. A wife and a mother, Kaneng is the first female recipient of World Deaf Leadership (WDL) Scholarship.

Meet Kaneng as she shares her story to encourage others

This journey started in 1987 at the age of 9 years, barely few months into my 10th birthday. I was in primary four and it all started like a joke. I woke up one morning, complained of headache to my late mum, she gave me Panadol which I gladly took and went to sleep with the hope of feeling better. I woke up later with a high fever. My temperature was very high that prompted my mum to talk to some of our neighbors who suggested that she should do the first aid method of cooling high temperature (tepid sponge bath), my mum did but it got worse so I was taken to the military hospital in Odogbolu, Ojoo, Ibadan. My Dad was a military man back then and we were living in Odogbolu Ojoo barracks. I was admitted into the hospital. I spent a period of almost two months being treated of meningitis. All this while, I had lost my hearing but I didnt know how to tell my parents that I can not hear them. I only found myself looking at their mouths when they are talking. I honestly, didn’t know what was happening to me at that period. I was yet to understand the concept of Deafness at that time.

One day while still at the hospital, my family paid me a visit, my immediate younger brother said something to me and was expecting an answer but I didnt reply him so this got my mum worried. She then said to me your brother is talking to you, why dont you reply him? I simply told her I cant hear, I didnt hear anything. She started crying and rushed to one of the doctors, there and then they did audiology test for me and I was confirmed Deaf. It didnt bother me much but I could see that my mum and dad were really worried, sad and depressed. My mum was always crying and I was the one comforting her. I was discharged from the hospital and good neighbors encouraged my dad to take me to University College Hospital (UCH) where I underwent different types of tests plus speech training.

After some months and there was no progress of me regaining my hearing back, I was taken to different prayer house for prayers. One of our neighbors encouraged my dad to take me to one herbalist who told my dad to buy whisky and mix it with some herbs which I was to be given a glass every night. Can you imagine what I went through drinking such at an early age! While I was taking the whisky mixture nightly, I was also going to different places for prayers. My parents were in denial and didnt accept my deafness in good faith. They wanted to see that I regain my hearing. Many of the prayer houses/churches prophesied that I will hear again soon, this made my parents to push for more prayers. I will never forget all the ordeals involved. My dad continued buying the whisky for me for many years till he could not afford it again (laughs).

After I recovered from the illness, I went back to school to enable me catch up. I was in primary four when I lost my hearing at Alegongo Community Grammar School, Ibadan. I must confess that it was very difficult coping in a world of silence. My teacher was a very nice woman and tried as much as possible to speak slowly while I lipread her but it was a difficult task once she moved around the classroom ensuring that the students were following. I felt so lonely and empty. During break time, I often sat alone because it was hard to mingle with my classmates. I depended mostly on text books and any notes given out by the teacher to assist my progress.

In 1988, my dad was transferred to Kaduna, they enrolled me in a regular school. I just depended on lipreading whenever possible and my notes to help me. There were times I felt so sorry for myself and felt like I was the only Deaf person in the whole world because I never had a contact with any Deaf person. Lip-reading was one of the skills that really helped me cope because I was yet to meet any other Deaf person, let alone, seeing Sign Language.

I will never forget the day I came in contact with Sign Language, it was one of the scariest day of my life (laughs). It is interesting to know that I completed my primary education in 1989 but had to stay home for a period of one year (1990) to take care of my ear. I was going to Ear, Nose and Throat (ENT) clinic weekly for injection and taking drugs to enable me hear again. My parents were of the opinion that I will hear again based on what the doctors and neighbors said. After completion of the treatment and still unable to hear, my parents insisted that I continue with the treatment for another one-year period. I was so upset and told them I will run away so they became afraid and allowed me to go back to school. While in Kaduna, I wrote common entrance examination and was given admission to Government Girls Science School, Shendam in Plateau State.

Before I resumed the school, my elder brother went to do some inquiry regarding stuffs I needed to bring to the school and also told the principal of my Deafness and to seek how they can accommodate me, the principal made it clear that they will not admit me but instead referred me to Plateau School for the Deaf, Jos. My parents didnt tell me but took me there. Upon alighting from the car, I saw some group of Deaf boys raising their hands in the air, I was so scared that I ran and hide behind my mum. I asked her who they were? I could see the fear in her eyes while she replied me they are Deaf like you I replied her angrily God forbid, I am not Deaf like them. I then told her I wont school there. They should just take me home. The principal came and lied to me that they placed those who can talk separately from those who use sign language that was how I accepted and enrolled in the school.

I was still in denial of the fact that I am Deaf. I refused to learn sign language. I was ashamed of sign language, let alone, learning it. I was always talking with my teachers orally but when it comes to my classmates, I either gesture or write on paper for them. I was lucky that some of my classmates can talk so sometimes we do talk with each other. Gradually, I started learning sign language but it wasnt in open. I will hide with one of the student that was teaching me and would sign. It was during the course of learning that I see Sign language as an interesting language. I picked it up fast and I blended into the Deaf culture easily.

After my secondary school education, I went on further to Kaduna Polytechnic where I obtained a Diploma in Special Education (HH). I secured a teaching job with Plateau School for the Deaf, Bassa and worked there till 2003 when I got admission to Gallaudet University in Washington DC, USA where I obtained my first and second Degrees.In fall 2003, I was awarded the Edward Miner Gallaudet (EMG) scholarship that covers my tuition for one year. I also won the World Deaf Leadership (WDL) scholarship funded by the Nippon Foundation in Japan. I was the first female recipient of this prestigious award.

I had the opportunities to do my internship in both regular and the Deaf schools during the course of my studies. I was a full time 4th grade classroom teacher at Phoenix Day School for the Deaf, Arizona, USA before eventually returning home and now working with University of Jos.

I am so proud of sign language today that I use it anywhere I go. For example if I go to the bank and the teller says something, I often reply using sign language. Looking back, I have no regret at all because I have gone far in life as a result of my Deafness and sign language. After losing my hearing, I was ashamed of telling people I am Deaf but today, I am more than proud to let the world know that I am Deaf and sign language is my major means of communication.

ADVICE TO DEAF PEOPLE AND PARENTS OF DEAF CHILDREN

To my fellow Deaf: Being Deaf doesnt mean end of the world. I believed that we are all unique in our own special way. Cherish yourself and have a high self-esteem. Do not allow the society pity or make you feel less important. Do what you are good at doing with a sense of pride. Do not look down on yourself because of your deafness, work hard and be self-dependent so that you can become a better citizen by contributing your quota towards the development of your community, society and the world at large. Stop wishing you were hearing.

To Parents: It is ok to have a Deaf child/children. Do not feel a sense of guilt or pity. People will say all manner of things, but you need to cherish your child, give him/her/them the love, support and care you would give to your children without disabilities and see them bloom to become responsible children. Be happy and learn how to communicate with your child in the language he/she understand better which is sign language. Do not compare your Deaf children with other children. They are special and learn in a unique way. Accept them the way they are, believe in them and always be positive that they can make it in life. Do not hide your Deaf/child living with disabilities. Invest in them and see what they turn out to be in the future.