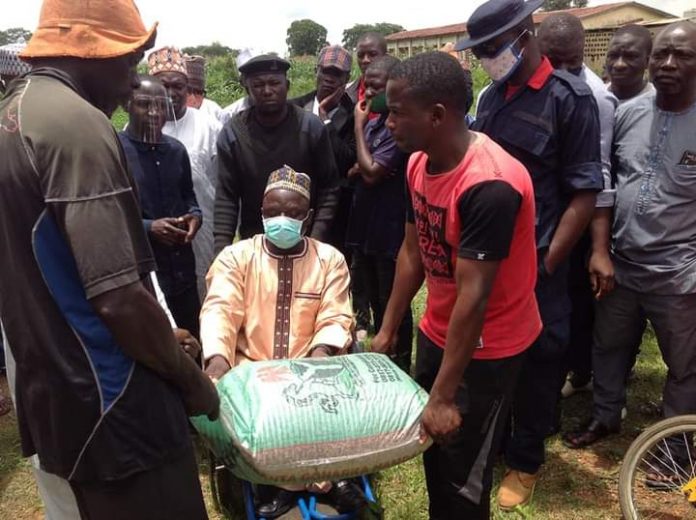 Beautiful Gate Handicapped People Centre has distributed Fertilizers to Widows in Mangu Local Government Area as part of it’s effort to alleviate the sufferings of the vulnerable, boost food production and attain self sufficiency in food production.

The beneficiaries were drawn from Langai, Gindiri and Panyam Districts which were affected by crisis with at least 119 widows from the two Districts and 40 in Depuri benefited from the gesture with each of them getting a bag of fertilizer.

Presenting the farm input, the Executive Director of Beautiful Gate Handicapped People Centre, Chief Ayuba Burki Gufwan said the gesture was to identify with the Widows who lost their breadwinners to the crisis that affected their communities and to give them sense of belonging.

He said the idea of distributing Fertilizers was because the areas are agrarian with many of the women involved in farming, hence the need to assist them.

Gufwan also admonished the Widows to trust God and live their lives in total obedience to him, despite their situation, noting that he is the Author and Finisher of their faith.

He also urged them to adhere to all COVID-19 Health protocols aimed are preventing the dreaded virus ravaging the World.

Also speaking, Vice President of Pyam Chiefdom Development Association, Mr. David Bashiri lauded the humanitarian gesture of the centre and for putting smiles on the faces of the less privileged.

He challenged other NGOs, government and well spirited to emulate the centre by coming to the aid of the less privileged.

The Miskagham Depuri, HRH Da Solomon Gufwan commended Chief Ayuba Burki for being a worthy Son and Ambassador of the area. He described Chief Burki as a humble personality who is impacting humanity and the society.

Beneficiaries who spoke in the areas visited who could not hide their joy appreciated the centre for the assistance rendered to them and for identifying with them in their trying moments.

They prayed God to open more doors to the centre to reach out to more less privileged.

The event held at GSS Bwalbwang Gindiri and the Palace of the Miskagham Depuri Panyam District all in Mangu LGA in strict compliance with COVID-19 regulations.