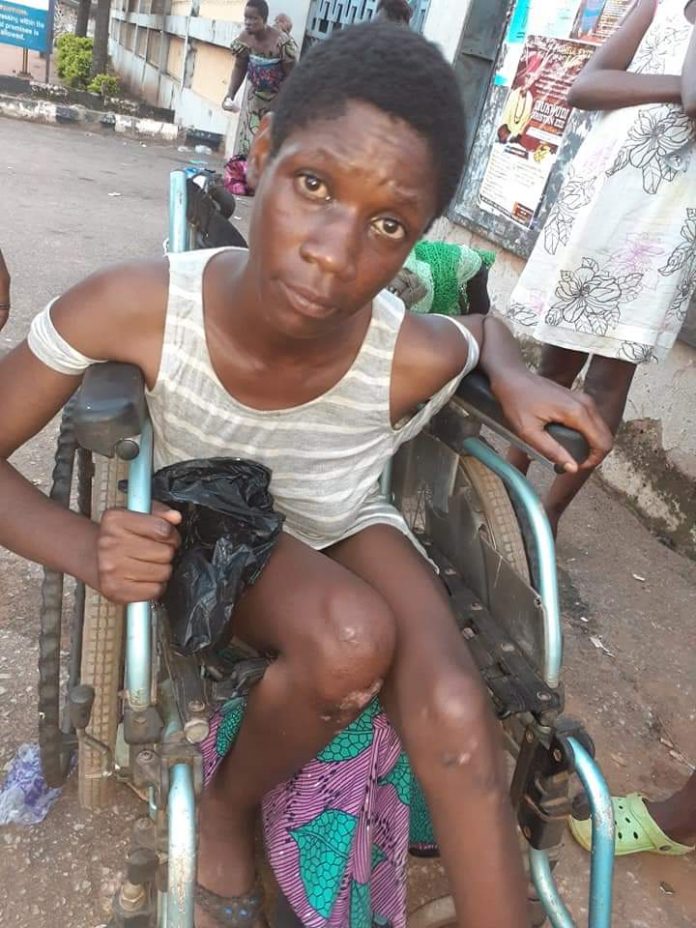 The stanza in the Nigerian National Anthem, ‘Arise O Compatriots’ came alive recently as Nigerians from different walks of life rallied round a physically challenged girl, Ginika, as a good Samaritan procured a brand new wheelchair for her to aid her easy movement.

Ginika, an orphan, before now was relying on her dilapidated wheel chair with a block support behind, which was not comfortable for her and had seen her sustain several injuries.

But fate smiled on her after a physically challenged lady, Nwogbo Gloria Mary ran into Ginika and started a campaign to help her situation.

According to Mary, she was touched after she interviewed Ginika’s younger sister who was her care giver and was hawking pear at the same time.

“Ginikas wheelchair was seriously bad!! She was sitting on the skeleton of the wheelchair with a block support at the back!! She has sustained several injuries prior to that bad wheelchair. It was a horrible situation!!”

Moved by what she saw, Mary started a campaign on Facebook, calling on her friends to support a move to procure a fairly used wheel chair for Ginika.

“All hope are not lost since you can be an eyes to the blind!!and a leg to the lame!! We can’t be insensitive to the plight of this young girl cos she has nobody. Collective we can make Ginika walk again by providing for her a wheelchair. Yes we can” she wrote on her Facebook wall.

Though, the budget for the wheelchair was between N40,000 to N50,000, Mary was surprised at the massive response she received from several quarters.

Mary returned to Facebook to share the good news that not only was the response massive, a good Samaritan who preferred to remain anonymous had way-billed a brand new wheel chair for Ginika.

She wrote, “Just like i promised you guys on my last post that am gonna deliver to Ginika all you’ve contributed on her behalf. Once again my appreciation goes to all our donors!!

“Our brother who contributed 40k for wheelchair and pleading to remain anonymous!! I’m already on market survey concerning the wheelchair on Monday before i got a call from anonymous brother who informed me that a wheelchair is already on waybill to the east. Unbelievable!! God is wonderful!!

She also noted that the Director of Centre for Citizens with Disabilities (CCD), David Anyaele also asked her to check for the cost of a good wheelchair for Ginika before the offer from the anonymous donor.

“Thanks to the Director centre for citizens with disability who called and asked me to go and check for a good wheelchair and send him feedback!!Wow although i later called and informed them that a wheelchair has already been provided!!

“A very big thanks to each and every one of you and May God’s blessings and favour rest upon your lives in Jesus name amen!!”

Mary noted that since a wheel chair had been donated, she used part of the monies donated to procure food stuffs for Ginika and her sister, including toiletries, disinfectants, beverages, bag of rice, carton of Noodles, carton of tomato paste, condiments, egg, oil (red/groundnut oil), wears etc and wheelchair.

She said she also handed the left over cash to the sisters.

According to her, the gesture drew tears of joy from Ginika and her sister.