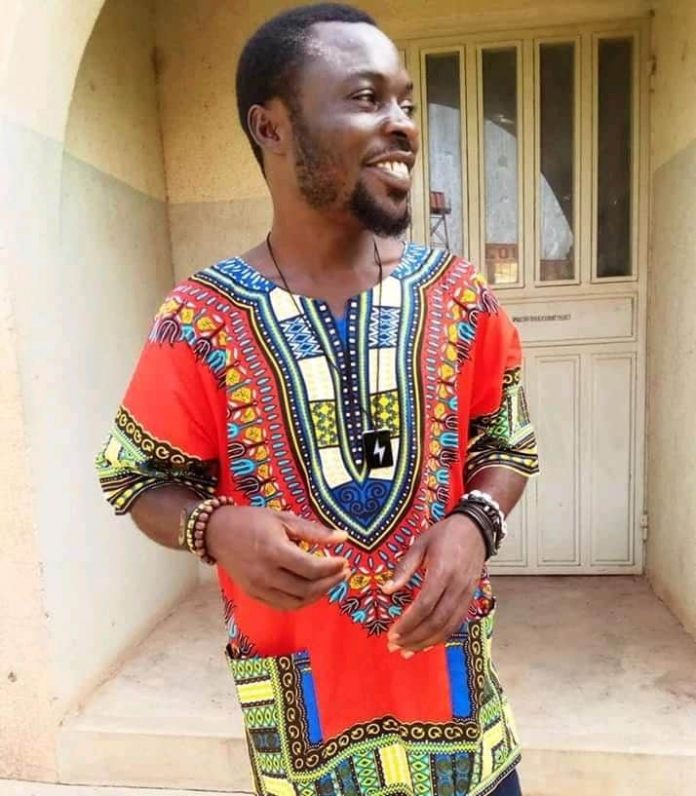 Fekaanga Torkuma Kenneth, Better known as Leo De PalmWine Tapster. Fourth born but the first son of a family of seven, from Buruku, Benue state. He is a teacher. Aside that, he is a poet and freelance writer. He engages in Artwork and makes necklaces which he fondly called “Afrinecklaces”. He also produces handmade cards for birthdays, weddings etc.

Journey Into Deafness
Meningitis sent me to a local clinic in 1994 when I was only seven years young. There, I stayed for more than two months, there were no professional medical personnels, the nurses were unable to diagnose my ailment, so they were vaguely prescribing drugs for me until I lost my hearing.

It was a gradual process. At first, I could only hear the sound of a bee buzzing around my ear like it has found the nectar within, whenever my Mom (the only person I was too free with) spoke to me. Also I could neither stand nor walk on my own.

After being discharged. Dad and Mom weren’t ready to make peace with the fact that the sounds entering into my ears were very thin and meaningless. So I was made to go through series of a herbalist’s dubious experiments, dripping dirts into my ears I was finally left with only four Sense Organs.

Though, an Audiologist in a Jos hospital, after seeing the dirts through an Otoscope, removed them from my ears with a ‘water-gun’ (oops, pardon my ignorance, I don’t know what to call that instrument). It was like a big gun with clean water as bullet.

My Uncle Joe, of blessed memory, was busy assuring me that I will be fine.

The process wasn’t painful, but as a child, I cried because; little idiot was scared, as the female doctor had to stand at a distance and shoot the water right into my ear to force the dirts out. Lol.

_”In my deafened ears, there exists a low dull sound, intermittently reverberating”_

Coping with Deafness
I reluctantly returned to school after so much persuasion from Dad, Mom and Big Sister Doowuese who taught me drawing (Heavens rest her beautiful soul). I had to repeat Primary two, and continued to primary four.

It was hard to cope as the only Deaf pupil in the school. I erroneously believed and felt that I was alone in the world, so I used my playful nature as a panacea to keep me from the vague feeling, and the subtle stigma within the school.

Thankfully, I didn’t feel discriminated, but I was doing pretty bad. I wasn’t learning. I wasn’t following. I wasn’t giving myself to anything intriguing.

One morning in 1997, I was crying. Dad and Mom took time to coax me to give reasons. Told them, I was wasting my school fees, learning materials and the energy to trek fro and to school. So I was quitting. The ambience suddenly turned awkward. But I quitted anyway!

I grew up into a simple and gentle but weird dude who built shells around himself. Lol. So I don’t always feel the stigmatizations associated with disability. And for the umpteenth times, I had cleared people from being so credulous with some apocrypha about persons with disability.

But I often feel discriminated
-When people/employers use my disability to measure my abilities, see my disability before seeing me as a person, try to show me sympathy instead of empathy.

I remember going to an office to deliver a service. I was connected by someone else. And the man behind the desk was not expecting a Deaf guy. Told him I am Deaf when I couldn’t lipread him. Just then Oga was asking too many questions pertaining to my ability to do what I was called to do, and how I could do it, and all that. I simply wrote back to him, “Sir, I said I’m Deaf, not Dead”.
Before I left, Oga wrote, “You did wonderfully well, and I love your handwriting”.

Encounter With Sign Language
2000. After spending three years at home as a dropout. A lady told my Dad that there is a school for me. We went to St. Francis School For the Deaf and Blind, Vandeikya, Benue State.

And for the first time, I saw group of students wriggling their hands and fingers to communicate. It was funny and captivating. I had to disturb my Dad with questions like:
What are they saying?
What do they put in their hands that they move tirelessly like that?
How do they understand themselves?

All my Dad could tell me was, “You will learn”.

I had to re-start from primary one, when my former classmates were already in JSS 3.

In 2004, Uncle Kevin took me from primary 5 to JSS 1 at Kaduna State Special Education School, Kaduna. Before JSCE, an organization came to tell us that, students with the best results would be sent to America for one year on internship.

I have always been too playful, but I came out with the best result. How glad and confident I was, that I would be going abroad! Sadly, on the day to prepare for interview and what was required; one of my teachers said to me, “You are not eligible for that, because you aren’t from Kaduna State”.

That was the first time I saw the grotesque mask of nepotism. This broke my heart.

Came back to Benue state to have my SSCE at Rev. Fr. Patrick Foley College, Alu-Abwa.

There, I was the only Deaf student. Thankfully, I didn’t face discrimination, because, let’s say, I know I am good with my studies, and I made my teachers and mates see that there is truly ability in disability! I had access to anything except hear, so my amazing mates lent me their ears all through.

I did my NCE in Special Education at Gboko College Of Education, Gboko, a private institution.

On completion, we discovered that the institution was having a thing or two to clear with the NCCE. Until today.(since 2012). So the institution hasn’t been able to issue Certificates to its Special Education graduates. Because of that, I prefer to tell people that I’m a “NCE Dropout”, just to keep me from telling long story!

I’m still hoping to get back to school when I have the opportunity and financial ability.

Achievements
Can’t tell which is big. But each day that I live is an achievement, such that it present to me an opportunity to brace up to live and thrive through the storms and gales.

Advice
I know anything can happen. But people should do well to take their children to a better, if not the best hospitals where they can get better treatments whenever they are sick. And seek the presence of professional medical personnels when necessary.

Let’s also abolish nepotism, and create conducive and inclusive atmosphere for all!

Deaf Nigerian Profile 026: Deafness Is Not The End Of The...