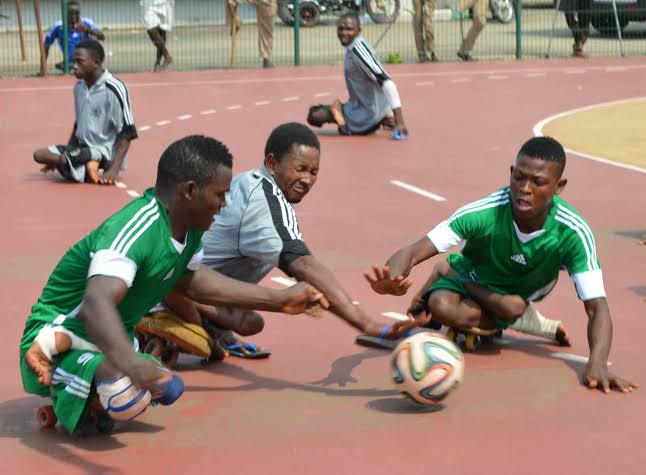 The Kwara Football Association expressed determination to curb street begging in the state through the promotion of para-soccer.

Chairman of the Association, Malam Idris Musa, made the pledge when he met with the state’s Para-soccer players on Thursday in Ilorin.

Musa said that the association would support the physically challenged in the state and encourage them to engage in para-soccer.

He said that they would also be encouraged to engage in some vocational activities, which would take them away from street begging and also reduce violence in the society.

Kwara FA Chairman, Malam Idris Musa and members of the state para-soccer players after a meeting on Thursday in Ilorin

Musa also said that his board would explore all possible means to alleviate poverty among the para-soccer players in the state by providing them with the needed support.

He said that the players would also be placed in some vocational activities that would bring additional income for them.

He noted that the objective behind the mission was to empower the players by assisting them in getting wages or allowances through active engagement in Para-soccer.

While assuring the players of the association’s support, Musa disclosed that his board would assist in seeking sponsorship for them and in ensuring a suitable training ground for the team to carry out its activities in the foreseeable future.

Jamiu Mogaji, who led the team, appreciated Musa for operating an open door policy and pointed out the sacrifice the team had made in attending various competitions with little or no financial support.

Mogaji said that majority of the players were bread winners but turned to the streets to feed their families and pay rents which had not been easy.

He called on the FA and the Kwara Government to provide them the needed moral, physical and financial encouragement as the most important item.