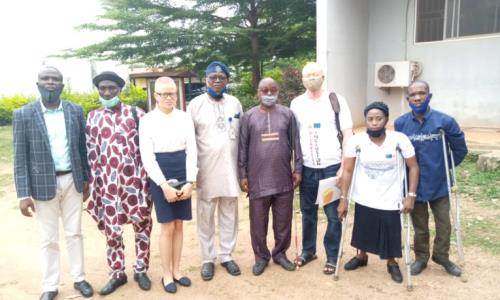 The Osun State Independent Electoral Commission (OSIEC) has assured Persons with Disabilities (PWDs) of inclusion and special consideration to enable them partake adequately in the forthcoming local government elections in the state.

The Chairman of OSIEC, Otunba ‘Segun Oladitan gave the assurance in Osogbo, the state capital during an interactive session with the Albino Foundation’s team and representatives of Joint National Association of Persons with Disabilities (JONAPWD), Osun state chapter.

The meeting was facilitated by The Albino Foundation under the European Union Support to Democratic Governance in Nigeria (TAF/EU-SDGN) Project implemented in the state.

Earlier in his presentation, TAF/EU-SDGN Project Supervisor in the state, Mr Kehinde Ogunbiyitan intimated the chairman of the Commission on the European Union Support to Democratic Governance in Nigeria (EU-SDGN) project titled Enhancing the Civic and Political Participation of Persons with Disabilities in Nigeria which is implemented by The Albino Foundation in the state.

Ogunbiyitan proposed areas of partnership with the Commission on voters education and inclusion of Persons with Disabilities in the electoral processes during the forthcoming local government elections in the state which includes.

These include training of OSIEC staff and election Ad hoc staffs on disability inclusion so as to conducting an inclusive process during the forthcoming local government elections in the state.

He urged the Commission to consider the employment of Persons with Disabilities as disability desk officer in the commission and as election Ad-hoc staff.

He also sought provisions of assistive voting aids and materials such as magnifying glasses and provisions for improved access.

The Chairman, Joint National Association of Persons with Disabilities (JONAPWD) in Osun, Mr Kehinde Onitiju sought the cooperation of the Commission to enable them participate in the polls.

Onitiju who was represented at the meeting by the Vice Chairman of JONAPWD, Mr Stephen Oluwafemi said that persons with disabilities should be allowed to vote on time and leave the polling units without delay.

Also, the Desk Officer in the Special Needs Department at the Ministry of Youths and Sport, Mr Lawrence Awoyemi while speaking at the meeting expressed the need to create more space for Persons with disabilities in the electoral process.

The Chairman of OSIEC declared that Persons with Disabilities would be given special consideration to enable them participate actively in the process without going through avoidable stress.

He also declared that Persons with Disabilities who want to contest in the election would pay one quarter of the nomination fees to ease their participation, given their conditions.

The Supervisor of the TAF/EU-SDGN Project, Kehinde Ogunbiyitan appreciated and commended OSIEC for granting the requests of the Persons with Disabilities while looking forward to collaborating with the Commission on ensuring the inclusion of Persons with disabilities in the forthcoming Local government elections in the state.