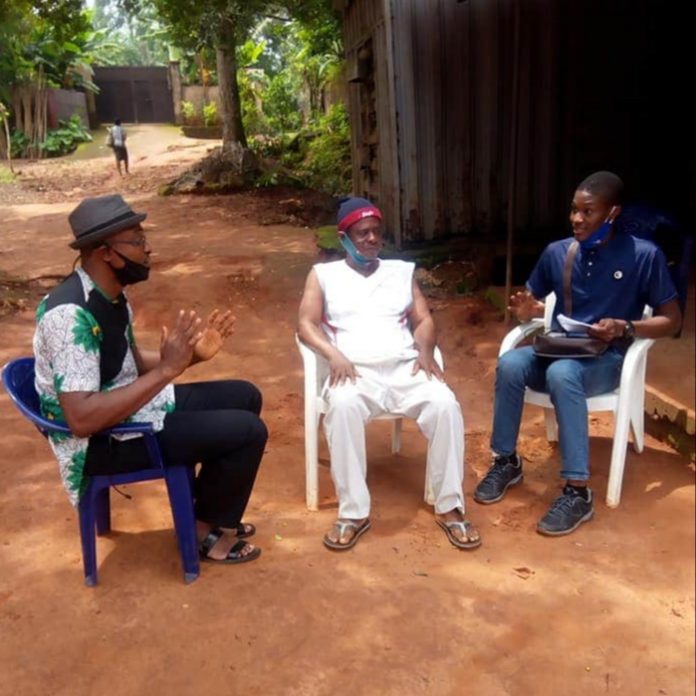 Veteran member of the Anambra State Association of the Deaf (ANSAD) Polycarp Udeagu has recounted how the Biafran war in 1967 made him lose his hearing and the challenges he had gone through since then to survive.

Polycarp, who shared his life’s journey with Douglas Izuu and some members of ANSAD, said he was born in 1964, three years before the war erupted, with his hearing ability intact.

But things went awry for him when the war began, which lasted three years.

“I was heavily disturbed by all the things that happened during that tumultuous period, including the thundering noise of artillery, bombs, guns, planes, missile launchers, and other heavy weaponry used by both sides.

“God bless my elder sister who carried me on her back to safety from one place to the other. We spent a lot of nights in the bushes as did lots of other people. Wherever I was during the war, my ears couldn’t find peace. I fell sick after the war, in 1972 to be precise.

“I don’t know what that sickness was and could only use paracetamol to treat it. Later on, I was taken to the hospital by my mum. That time, I could still hear. I remember hearing the noise of different vehicles like Volvo, V-boot, lorry, and so on,” he recounted.

That era was the beginning of a challenging journey for him, as he recalled beginning to experience what’s medically known as ‘’tinnitus” which means ringing or buzzing noise in one or both ears that may be constant or fleeting and is often associated with hearing loss.

He said the buzzing noise became so irritating and hearing became increasingly difficult.

“I called mum and told her that I couldn’t hear her well. She said that she would call the doctor,” he said.

But one of the devastating effects the war left in its wake was that there was no experienced doctor nearby and he had to settle for several doses of injections that triggered constant tinnitus and gradually resulted in his deafness.

“When I got discharged, I couldn’t walk properly. I walked like I was coming out from a beer parlor after an all-night party. I had a lopsided gait and a faulty sense of balance. So, I stayed at home until my walking improved.

“Once deaf, I felt very alone and believed that I was the only deaf person in a hearing world,” he said.

With much resources spent on his health, schooling became nearly impossible.

But Polycarp, a native of Abagana in Njikoka Local Government Area of Anambra State, is one of many deaf persons in Nigeria who have not allowed their situation prevent them from achieving their aims in life.

Accepting his new predicament, Polycarp said after several months passed, staying at home became increasingly boring, he decided to get busy and joined a group of friends in making blocks from cement and soil, a decision that not only kept him busy, but helped him make some money while at it.

“I did that work for two years until my elder sister called on me to start schooling. I refused because I liked money and wanted to continue making money. My sister later played a prank on me by saying that there was better work for me at Enugu and that I should forget the one I was doing. I trusted her, so I decided to drop my shovel and get prepared for the better work waiting for me at Enugu.

“When I got to Enugu in 1978, I was enrolled in the Special Education Center, Ogbete Coal Camp, Enugu, and put in primary two. I sourly asked myself if this really was what my sister referred to as better work and soon resolved to make the best of the situation.

“I sat for my common entrance examination and finished my primary schooling in 1982. There was no interpreter then, which meant schooling was not an easy task. I had my secondary school education at College of Immaculate and Conception (CIC) Enugu State. In 1988, I became a proud O’level holder,” he recounted.

Done with education, Polycarp thought it was fate that arranged it when the Anambra and Enugu State governments announced automatic jobs for persons with disabilities. But not long after then his hopes was cut short as his several applications yielded no positive result.

But luck smiled on him in 1991 when a friend of his who was a civil servant by name. Mr. Protocol, through his connections, helped him secure a government job in grade level 03 with WAEC.

“Then, my monthly salary was one hundred and fifteen naira (N155.00) only, which was a lot of money in those days. I will proudly retire in a couple of years,” he said.

Polycarp, who was instrumental to the establishment of ANSAD and held the position as the first Chairman, said his tenure was successful due to the collective effort of some prominent deaf individuals in Anambra State.

He recalled that there was a deaf association in Enugu State that governed the affairs of all deaf fellows both in Enugu and old Anambra combined, but when the old Anambra officially became a State on 27 August 1991 under the Gen. Ibrahim Babangida regime, many things changed.

“Due to the creation of a new State, a new deaf association had to follow. As a result of this, I and many other deaf individuals from Anambra State resolved to come home and establish our own state association for the deaf.

“Some of us were executives in the Enugu State Association of the Deaf (ESAD). Before ANSAD was established, there was a lot of trouble, unnecessary misunderstanding, unimaginable quarrels over finance, arguments over who will become the chairman, and the like and we deaf found ourselves in a chaotic situation.

“To cut the story short we resolved to conduct a general election where all deaf individuals in Anambra State could gather and elect their executives. That was how I became the first chairman of ANSAD as many people know. While not officially, I did play an active role in the establishment of ANSAD.

He said his administration as ANSAD chairman recorded a few achievements including organizing the first international week of the deaf in the history of ANSAD.

Besides, he said through his office some deaf teachers and four sign interpreters got employment and also empowered many deaf individuals in Anambra State, while ANSAD got her first indigenous interpreter.

Advising deaf youths in Nigeria, he said, “Work very hard to build yourselves up and be able to help your brothers. Only your success will make your parents and people proud.”