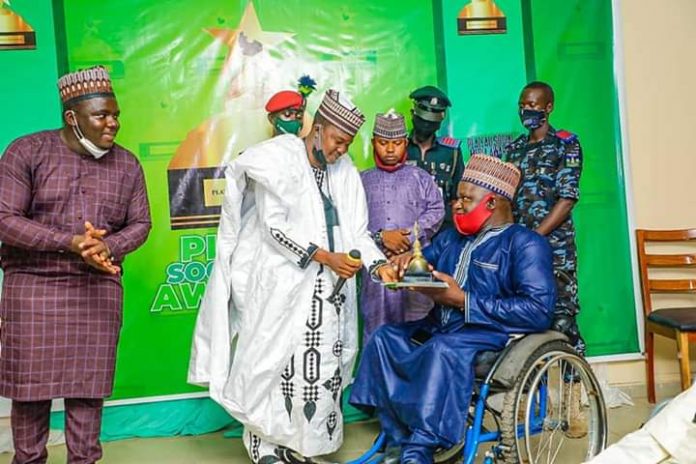 Executive Director of Beautiful Gate Handicapped People Centre, Ayuba Burki Gufwan has been presented with the best use of social media award by non-governmental organization organised by the Plateau Social Media Award.

The award was in recognition of Gufwan’s excellent humanitarian services in rehabilitation and support of polio survivors, people living with Disabilities and other vulnerable in Plateau State.

During the covid-19 pandemic, in other to alleviate the sufferings of the people as a result of the adverse effect of COVID-19 Pandemic, Beautiful Gate Handicapped People Center had extended humanitarian intervention to persons living with disability in Jos East, Barkin Ladi and Riyom Local Government Areas, Plateau State.

Aside that, the foundation, a Jos based non-profit organisation, had distributed food items to 300 person’s living with disability.

Recall that this was reported by Inclusive News Network (INN) on 16 March, 2020.

INN had also reported news of Burkin Ladi Chairman of JONAPWD Barr. Musa Davou, receiving palliatives from the foundation during the lockdown to cushion the adverse effects of the pandemic.

He has also donated tricycles to polio survivors in several local governments and LCDA in Plateau state.

Being a person with Disability has never stopped him from assisting other vulnerable groups. Despite being a polio survivor and person with disability, he donated fertilizers to Miango group farmers in crisis ridden communities.

Gufwan, also through his foundation also contributed 75 bags of fertilizers to women, widows and orphans drawn from villages in Mangu and Kombun districts in Mangu LGA.

All these are drawn from his social media with photos as proof. These are clear facts to justify why he deserves the award.

In a social media post shared on Monday, Ayuba said “Thank to your prayers and support, the Beautiful Gate Handicapped People Center was awarded the best use of social media, Non governmental organization by the Plateau Social Media Award.”

“This recognition will spur us to keep on with the rehabilitation and support of polio survivors and people living with disability,” he said.

‘This is the height of irresponsibility’– outrage as Funke Akindele throws...