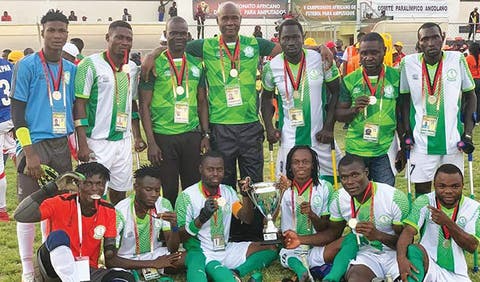 Nigeria’s amputee football team have been invited to represent Africa at the 9th International Amputee Football Tournament in Warsaw Poland, scheduled for September 19 to 20 in Warsaw, Poland.

The invitation was extended to the team after their performance at the last Africa Cup of Nations for amputee football, where they emerged in second place.

The Special Eagles will feature in the event alongside England, USA, Haiti and Mexico at the OSiR Bemowo Stadium, Warsaw.

Highlighting the importance of the tournament, President, Nigeria Amputee Football Federation, Suleiman Isah, said it was an avenue for scouts across Europe to search for players who would be signed to play professional amputee football.

“The Nigeria Amputee Football Federation received a letter personally signed by the competition manager Bogna Czepulkowska inviting us for the 9th International tournament Amputee Football Cup. Over the years the tournament has become one of the most prestigious and important amputee football events in Europe. Each team will play at least three matches,” Isah said.

“The Nigeria Amputee Football Federation is expected to cover transport cost to Poland, accommodation and dinner on 20th September- 45 Euro per person from the team and costs of accommodation and meals for extra persons as well as extra day- 55 Euro person per day. The organisers will set deadlines for payment of cost and presenting airline tickets.”

Isah appealed to philanthropists, corporate organisations and individuals to come to the aid of the federation, to enable the team attend the tournament, which he stressed would be a good avenue to help the country’s amputee footballers ply their trade in foreign leagues.