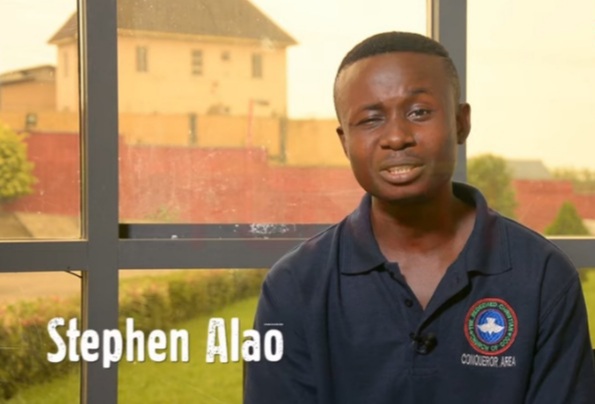 A graduate of the Adekunle Ajasin University, Steven Alao has cried out to the government to assist him get back to his normal life after a life threatening injury he sustained while serving his fatherland in 2019, rendered him partially disabled.

In an interview with The Punch, Alao, who graduated in 2017, recounted his experience saying that he was involved in a ghastly motor accident in March 2019 which claimed two other lives and one year after, he was still suffering aftereffects from the injuries sustained.

According to him, he was one of the National Youth Service Corps (NYSC) members selected in Kebbi State, where he was posted as one of the ad-hoc members for the 2019 general elections.

“During the second phase of the elections which is the governorship and the State House of Assembly elections, I was travelling from my place to my electoral duty post to get the materials I needed for the election in the local government, it was then I had the accident.

“I was taken to a nearby hospital in the community but they didn’t have enough facilities to take care of me. I later realised that as I open my eyes to the ceiling, I saw two women by my left and right side, they were using hand fan to fan my face. Then I woke up and realised that I had an accident. It was when I looked at my chest, I saw my singlet in a pool of my blood.

“I got to realise later that two people died from the accident and I vomited blood at the scene of the accident from my nostrils, my mouth and my ear. As I speak to you, it’s over a year the accident happened, but still I have issues with my rib, my back and my head and even my eyes, because of the accident.”

Alao said that when he didn’t make much progress in his recovery, he was moved with a military ambulance to Usman Danfodio hospital in Sokoto state and was admitted in the neurosurgical department where it was diagnosed that his brain had shifted and had to be reset with a machine.

He said: “I also had fracture in my rib. Blood also stuck in my ear and blocked it then I realised that I needed to relocate down to Lagos state for better treatment.

“In Lagos, I continued my treatment. Up till now, one year after, I still have challenges, life threatening illness I am presently battling with; I cannot breathe very well, I cannot see from a long distance. The more I sleep, the more I discover that my back is paining me.

“So I went back to the doctor and he said because of the accident, I have rib fracture, so they recommended orthopedic bed for me and that’s what I am using now. I expect that it will correct it with time. But if I handle any heavy object it will affect me. Even the internal organ connecting the nervous system and everything, it’s still affecting me. If someone was calling me from my left ear, I will think it’s from the right. I can’t hear well with my right ear and it makes noise up till now despite all the treatment at Lagos State University Teaching Hospital, LASUTH.”

Alao, who said aside the pains he is still nursing from the injuries, he had also faced rejection from several companies where he had applied for job, owing to his health conditions.

“I was posted to a financial company after the incident. But I couldn’t go there, even the MD refused to accept me because I couldn’t really hear what he was saying. I could only hear from one ear. He told me he couldn’t accept me because I was having a medical issue. I pleaded and I begged that if he can accept me so that I can do my documentation.

Appealing to the government for intervention, Alao said doctors have told him that he would need to travel abroad for further assessment to correct any defect, lamenting that he does not only feel dejected but also depressed that he was been abandoned after his life was altered while in the service of his country.

“Personally I borrowed money from financial service company, my parents had to run around for money, my uncles tried for me, now it’s just as if I am alone, I don’t have anybody and I know and believe that I am a Nigerian and I have worked for my country. I really appeal to the government to help me so that other people will know that the government really caters for the youths after participating in a national duty particularly INEC duty.

“I use this medium to plead to the government to assist me so that I can get further medical attention, If its providing job to take care of myself, I need money so that I can continue my life and take care of my family so that I will not become depressed and then lead to something I don’t pray for. Please help me,” Alao said, fighting back tears.