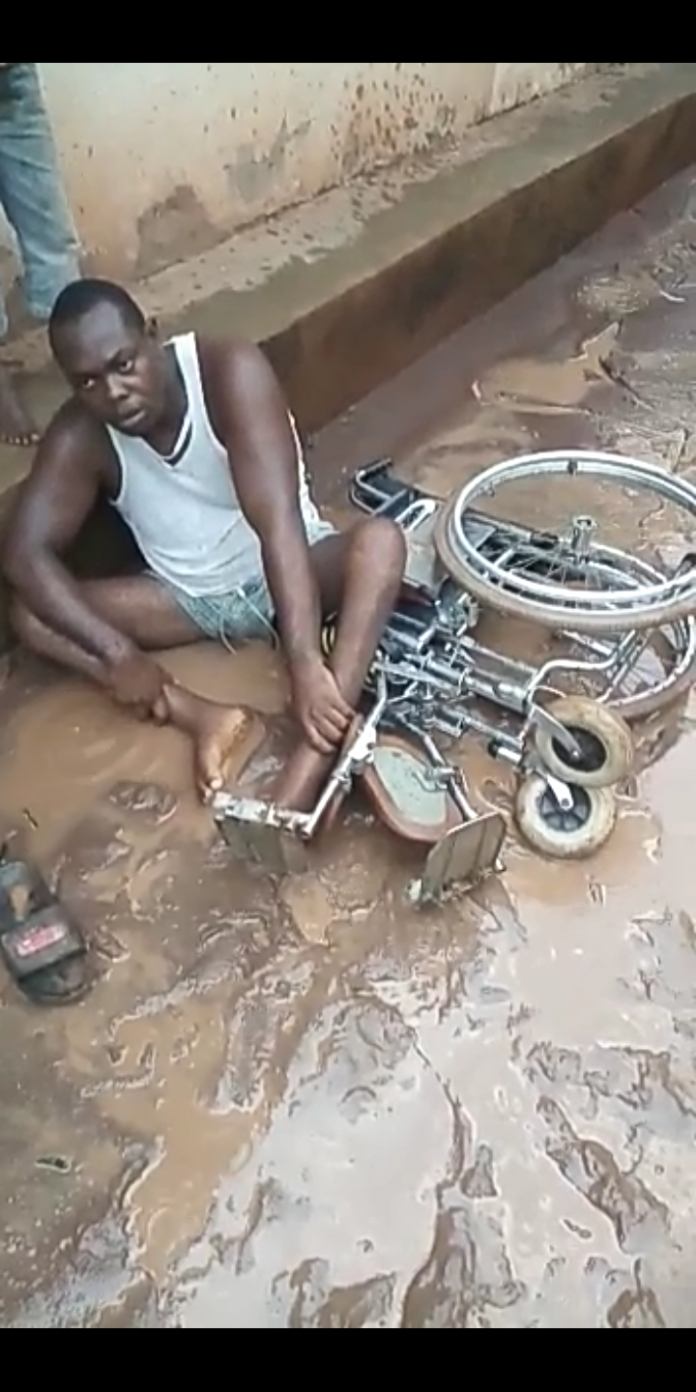 A physically challenged man, Onwubariri Emmanuel Chidube has demanded for justice after he was attacked and pushed off his wheelchair by a man in Imo State leaving him with several degrees of injuries and constant trauma.

Chidube, who sustained spinal cord injury in 2008 from a car accident that has left him confined to a wheelchair since then said on June 17, in Oka Ndibinihu Village, Isiala Mbano Local Government Area of Imo state, he was physically abused and assaulted by one Mr. Chukwudi Emmanuel Udunka.

Narrating his ordeal, he said trouble had started on May 30 when one Mr. Captain Simon Onwubariri with some youths acting on the instruction of one Mr. Simeon Udunka came to his house and made away with his generator set with the reason that his elder brother owes the village.

Chidube said he pleaded with them not to confiscate his generator set since it was his and not his elder brother’s.

“If my brother owes you please leave me out of it” he pleaded but they told him to go and call any police or army that they are not afraid.

“I had no other option than to make video of them taking away my generator when I was not the one owing them. One of them Chukwudi Emmanuel Udunka on noticing that I have made a video of them tried to snatch my phone from me but he didn’t succeed, so he threatened to deal with me”, he said.

To make matters worse, Chidube said one of the men, Udunka around 7am on June 17 ran into his compound with a cutlass and a stick and it was raining.

“I was trying to go out and brush my teeth and eat something when he ran into my compound screaming that he is going to kill somebody, that he is going to cut down every member of my family and I said to him brother please stop this, he came into me with full force and pushed me off my wheelchair” he narrated.

Chidube said before the incident on June 17, Udunka had constantly verbally abused him and threatening to deal with him and would make jest of him that he could not retaliate because of his disability.

He said Udunka also told him that even if he reported to the Police, he will go scot free as he had links with the Imo State Commissioner of Police.

Recounting the incident, he said when he was pushed, he fell on muddy ground, his wheelchair damaged and he was badly injured, requiring him to be rushed to the hospital by his younger sibling.

He said he filed a complaint to the Police which led to the arrest of Udunka and his friend who was also part of the people that took his generator while the Police urged him to return to the hospital and continue his medication since he was in pains.

But Chidube said when he returned to the hospital, he was denied admission, a situation that eventually left him with a pressure sore around his private part.

He also lamented that while he was seeking medication in the hospital, his abusers were released without contacting him and the case was no longer being attended to adequately.

He said alleged that the Police was conspiring with his abusers to make it difficult for him to get justice.

He also expressed fears that he might have sustained fresh injury on his spinal cord which could cause complications in future.

“Since I was pushed off my wheelchair, I have been afraid; I pray I don’t have complications that may take my life because I have been on painkilling drugs since that day.

“I consulted two doctors and they requested an X-ray and MRI scan to ascertain my spinal condition which I don’t have money to carry out and the person who did this to me is still moving around boasting that he will do more” he said.

Chidube therefore called on Nigeria to assist him get justice from his abusers.