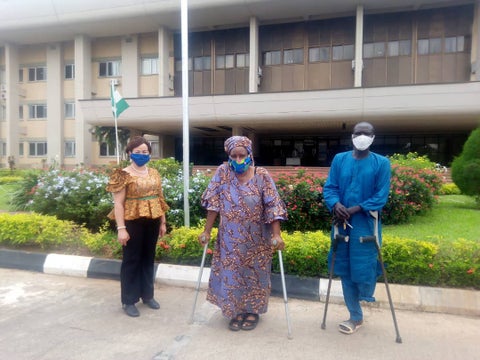 President Muhammadu Buhari has been urged to seize the opportunity presented to him to establish the Nigerian Disabilities Commission to leave a legacy that would write his name in gold, create an indelible impression in the hearts of disabled Nigerians and documented in a Presidential Library.

He was also told that the same golden opportunity would grant him an indelible space in the hearts of over thirty-one million Nigerians living with disabilities; the rising numbers of almajiris, retiring senior citizens, and internally displaced persons in Nigeria.

These were part of the issues raised in a letter submitted by the Chairperson/Secretary; The Joint National Association of Persons with Disabilities, Miss Omotunde Ellen Thompson, and signed by the President, Equal Rights for Persons with Disabilities International Incorporation, Chief Eric Ndubueze, Ufom, President Buhari was however informed that the legacies he would leave behind might be negative if he fails to relieve the current Minister of Humanitarian Affairs, Disaster Management and Social Development Hajia Sadiya Umar Farouq of her post.

In the lengthy document, the special citizens accused the Minister of having intelligently and willingly excluded their key officers from negotiations during the build-up to the establishment of the Commission which is most likely to bring up political jobbers that would sour the existing cordial relationship between the President and members of the group at home and in the diaspora.

According to them, “per the aforementioned, we humbly and respectfully, move to plead with you, to please use the remaining less than 3 years in office, to properly, shape how your history and LEGACY, should be truthful, told or written or presented and achieved by us and other Nigerian interest groups for the future generations of Nigerians and Nigerians with disabilities.

“This is because as soon as your term in office is over, you will lose total direct control over how we the Nigerians with Disabilities in the Diaspora and those based at home, will definitely start to truthful interpret, tell or write or document or achieve your true stories, history, and LEGACIES.

” We will definitely copy the same kinds of ways and standards, which were applied by our fellow Americans with Disabilities, whereby they successfully, advocated, negotiated, and demanded truthful narratives and presentations of the longest-serving best United States President Franklin Delano Roosevelt. Thank God that we directly participated during that time and must do the same when you retire.

” Sir, please note that we will definitely build President Muhammadu Buhari’s Disability Museum and Monument and tell it all as it was, exactly the same ways like the U.S. President Franklin Delano Roosevelt Memorial–Presidents: A Discover … And at that time Sir, you and your family will not have any kind of direct or indirect control over our positive actions.

“Please Sir, while considering this valid request, note that the Minister of Humanitarian Affairs, Disaster Management, and Social Development Hajia Sadiya Umar Farouq, is the wrong person, that will truly represent you in duplicating and implementing the above.

“Sir, it’s sad that today, this June 12, 2020, Nigeria’s Democracy Day Celebrations, over 31 Million Nigerians with Disabilities, 15 Million Almajiris, millions of Internally Displaced Persons (IDP), and millions of retired Nigerians, were knowingly or deliberately and intelligently, completely excluded from participating by the Minister of Humanitarian Affairs Disaster Management and Social Development Hajia Sadiya Umar Farouq, who failed to be truthful in implementing the Discrimination Against Persons with Disabilities (Prohibition) Act, 2018, the United Nations Convention on the Rights of Persons with Disabilities (CRPD), especially its, Article 4 – General obligations (4.3) and Sustainable Development Goals (SDG) 2030 Agenda.

“The Nigerians with Disabilities Act (NDA), especially its Part VII, ESTABLISHMENT OF A NATIONAL COMMISSION FOR PERSONS WITH DISABILITIES, clearly mandated on; “Section 31. (1), There is established the National Commission for Persons with Disabilities (in this Act referred to as “the commission” to be placed under the Presidency.”

” It is mandated in section, “32 (1) There is to establish a Governing Council for the Commission (in this Act referred to as the “the Council” which shall conduct the affairs of the commission.”

” Its mandate continued at sub-section, “(2) The Council shall consist of: (a) A part-time Chairman; (b) One persons with Disability from each geographical zone; (c) a representative each from Federal Ministry of; (i) Education, (ii) Health; (iii) Sports; (iv) Women Affairs; (v) Housing; (vi) Transport; (vii) Environment; (viii) Labour and Productivity; (ix) Justice; and (d) a representative each from the National Human Rights Commission and Planning Commission.”

” It’s mandatory Part VII, conclusion reads on section, “(3) The Chairman of the Council and one representative each from the 6 geo-political zones, shall be appointed by the President subject to confirmation by the Senate.”

“Therefore Sir, you have observed that the Nigerians with Disabilities Act(NDA), which was knowingly or deliberately and intelligently, enacted, voted and passed into law by the 8th National Assembly, especially on its, Part VII, ESTABLISHMENT OF A NATIONAL COMMISSION FOR PERSONS WITH DISABILITIES, as clearly stated above, did not include, Federal Ministry of Humanitarian Affairs, Disaster Management and Social Developments on the list of representing Federal Ministries.

‘Sir, please note also that the United States President Franklin Roosevelt founds March of Dimes – HISTORY, “In 1926, Roosevelt started the non-profit Georgia Warm Springs Foundation on the site of the springs he visited to partake of the waters’ therapeutic effects. Twelve years later, he reinvented the charity like the National Foundation for Infantile Paralysis (NFIP). The NFIP was a non-partisan association of health scientists and volunteers that helped found research for a polio vaccine and assisted victims on the long part through physical rehabilitation,” the group declared. (Vanguardnews)