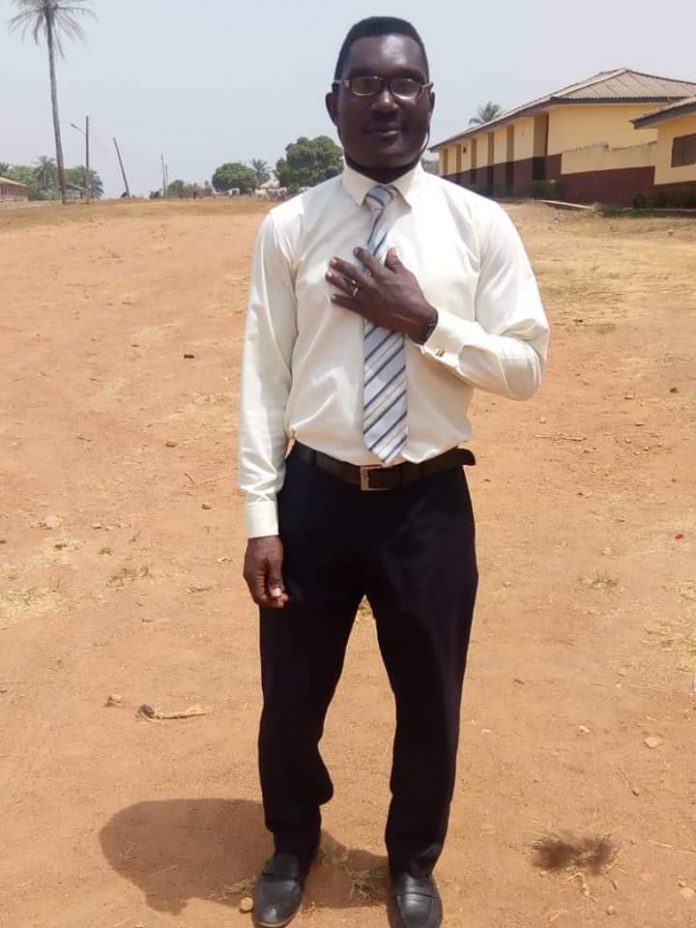 Akinola Adebayo Adekunle is from Abeokuta South Local Government of Ogun state. He had his primary and secondary school education in Abeokuta at St. Peter Anglican Primary School, Ake, and Reverend Kuti Memorial Grammar School, Isabo, Abeokuta respectively. He later went to Federal College of Education (Special), Oyo; University of Ilorin; and University of Ibadan. He is the second child in a family of five. Growing up was fun! He had all that he wanted, he never went hungry. His father did everything to make sure that he didn’t lack anything at home and in school. This reflected positively in his performances at school, as he hardly came second. Mr Akinola is a mind surgeon, a veteran researcher and lecturer at Federal College of Education (Special), Oyo.

Meet Akinola Adebayo Adekunle as he shares inspiring story to encourage others:

JOURNEY INTO DEAFNESS
I was an outspoken student but very studious. I was known for playing all sorts of pranks. We even had a group when I was in secondary school that was known for our boisterous ways. We always made noise, disturb other students, but my first position always remains intact. I was loved by students and teachers alike. I was always a happy and cheerful person. But all that changed when I lost the ability to hear again towards the tail end of my secondary school education. On that fateful day, I was only sick for a day, after returning from school. We went to the hospital later in the night, the doctor prescribed drugs and assured my dad that everything would be alright. We returned home but I couldnt sleep well. I then noticed at midnight that my ears began to ring and if anything was dropped to the floor it would sound as if someone was hitting something in my head.

That was how my journey into deafness began. My ability to hear began to wane. Dad took me from one hospital to the other. My mom and paternal grandmother took me to Alfas, churches, crusades, and herbalists, all in search of the cure. My parents and siblings were not ready to accept that I was deaf. They would assure me that nothing was wrong with me. Their words always strengthen me and I did not believe that I was deaf too. But then, I found it difficult to hear my teachers in the classroom, I was always giving wrong answers to questions, everyone began to wonder what was wrong with me, my circle of friends and noise makers thinned away, I became so withdrawn. The once life wire at every gathering had become a mere observer. I couldnt take all that, so I stopped going to school for almost three months.

To my surprise, our house became a Mecca of some sort! My friends and other students at my school and tutorial centre, my teachers, the principal of my school, all came to see me and encouraged me to return to school. A lot of letters and flowers and gifts poured in. I will never forget all those people in my life. My teachers Mrs Adu (now Dr (Mrs) Adu), and Mrs Fayomi stood out! We are still in contact till now. I returned to school and I thank God that I did!

Coping with the deafness wasn’t easy at all. I often transferred all anger to my sibling and parents. I was psychologically affected seeing all my mates and friends getting admission. Communication with people became very difficult. I often went to big crusades where I would go the front for pastors to pray for me. The embarrassment was so much but I was ready to do anything to be able to hear again. I remember a day when I was trying to familiarize myself with the tunes and lyrics of King Sunny Ades new album. My dad had just bought the album the previous day. Early in the morning, I got up and played the gramophone record, I couldnt hear anything. I increased the volume till I was able to perceive the sound. The sound was so loud, but to me it was normal. I was so engrossed that I didnt know when my family gathered in the sitting room. When I looked back and saw them in tears I was moved to tears also.

My dad asked me if I didnt know that the noise was too much. I told him it wasnt. it was then that the reality of the deafness fully dawned on them. But they did everything they could to help me cope. They were so supportive and they really helped me by talking to me in a way that I would understand them.

After secondary school I did not have many friends again. But Adedokun Adeyemo and Kayode Okesola remained a strong pillar of encouragement to me. They never left. All my mates got admission to different institutions but I was still at home. I got admission to University of Ibadan twice but my dad wouldn’t allow me to leave home. He was concerned about how I would cope with the rampant cult attack in higher institutions then. I remember a day he called me out of the bathroom to view the mass burial of over twenty students of Obafemi Awolowo University (OAU), who were killed by cultists. That was his fear for me. But fortunately, we got to know about Federal College of Education (Special), Oyo, through my cousin Oladimeji Taiwo.

He had attended a Muslim camp in Lagos and met deaf and hearing students communicating in sign language. He discussed with Kabiru Olagunju who was a student in SPED then (now a lecturer at UNILORIN). By the time he returned home he had learned a lot, even the manual alphabets. He came back home and arranged for a deaf lady, Riskat Rabiu, to visit our home. I didn’t know she was deaf and she didnt know I was deaf, because we were both lipreading.

To cut a long story short, I got admission to SPED after my initial refusal. I was able to meet Dr. Tola Odusanya, who encouraged me to learn sign language. My goal was to become a medical doctor. But the day I met him I made up my mind that if I couldnt become a doctor of human body, I could become a doctor of human mind. He hit me a lot of time whenever he saw me talking without using sign language. I really appreciate his efforts now, as well as that of Opeoluwa Sotonwa, Kabiru Olagunju, Temitope Paul Sheu, Toyin Fasakin, Bamiyo Ogunrinde, and numerous others who helped me to learn sign language and settled in the deaf world.

Deafness is not something that should be feared. It can happen to anybody anytime. It is not contagious and the society should know about this. What a deaf person needs from you is understanding. There is just a thin line that separates a deaf person from a hearing person, and that is in the mode of communication. There is nothing a hearing person can do that a deaf person cannot do. So, don’t keep a deaf child at home, look for schools for the deaf and give them all the support they need to excel and succeed. A hearing child is not better than a deaf child. With adequate training, a deaf child can achieve what is thought to be impossible by many.

There was a time I thought that deafness was the end of the road for me. But meeting some deaf achievers and reading about some of them has really opened my eyes and spurred me on. I remember a day my dad asked me to come out of the bathroom to watch a programme on MITV. He explained to me that the gentleman in the programme, who was Debo Ogunjirin, is a deaf person who studied pharmacy. He was there with his wife and a kid. Dad encouraged me that I can succeed too. That programme really encouraged me, it served as a catalyst to my progress. To the glory of God, I made it to the University and went further to procure my second degree. My humble self is an academic staff now at Federal College of Education (Special), Oyo.

Deaf Nigerians Profile 014: I Thought I And My Son Are...