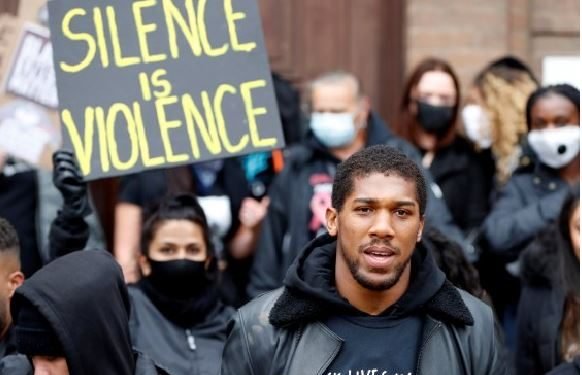 Anthony Joshua has shown his support for the Black Lives Matter movement by attending a protest march in his hometown.

The WBA, WBO and IBF world heavyweight champion took to the streets of Watford on Saturday to campaign following the controversial death of African American George Floyd in Minneapolis. 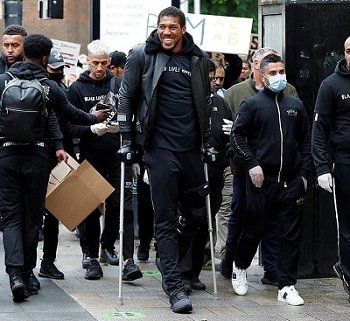 At one stage Joshua addressed those on the march by speaking over a microphone.

He was wearing a hooded jumper with ‘Black Lives Matter’ written across the front, like a number of other people on the march.

Joshua had to use a scooter and crutches to take part, as he recovers from a leg injury sustained in training.

Mayor of Watford Peter Taylor told the Watford Observer: “I was horrified to see the shocking murder of George Floyd and I know that this, and events like it, have caused pain to so many people.

“It’s important we always stand up and challenge every form of discrimination, racism and injustice.

The heavyweight champion addressed demonstrators in his Watford hometown

“I’m proud to be mayor of a diverse town, where people from many different backgrounds care for one another and share in each other’s successes and struggles. This is a source of strength for our town.”

Those taking part in the march appeared to be ignoring social distancing guidelines however, despite a precautionary warning from police.

“Of course we recognise the right to lawful protest and will be working to facilitate that while also ensuring the safety of everyone concerned.

“In light of the continuing risks around Covid-19, we would ask anyone attending to follow the current government guidelines to ensure their safety and that of others.” (The Nation)