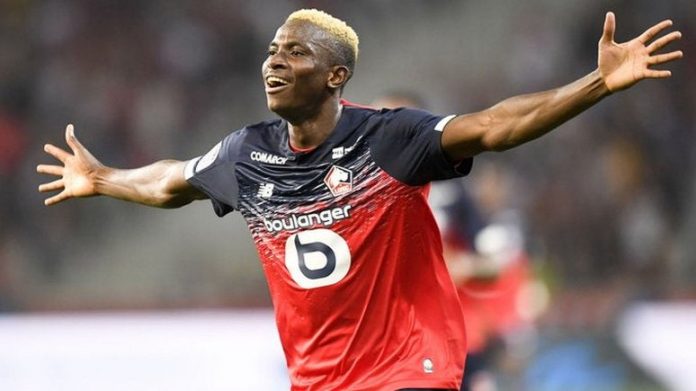 Nigeria’s Super Eagles duo of Victor Osimhen and Simon Moses have received player of the year awards from their respective club sides in Europe.

Osimhen won the player of the year award at Lille in France while Moses won the same award for Nantes in the same French League 1.

Osimhen won the award after spending a season (not completed due to coronavirus outbreak) with Lille. The 21-year old scored 18 goals and provided eight assists in all competitions for the French Ligue 1 side.

The stellar performances in his first season have linked him with a move away from the Les Dogues (The Mastiffs).

The Super Eagles striker joined the Great Danes last summer from Sporting Charleroi after his impressive performances for the Belgian side, where he scored 19 league goals.

Lille’s player of the year award is the second award Osimhen has won since teaming up with Christophe Galtier’s men, having won the Ligue 1 Player of the Month for October in 2019.

Simon Moses, on the other hand, is giving a good account of himself despite being on loan with Nantes in the French League 1.

The 24-year-old Super Eagles winger joined Nantes on a season-long loan from La Liga outfit Levante last summer and has played an outstanding part in helping them finish 13th on the table.

“With nine goals and eight assists in 30 games played, all competitions combined, Moses Simon left a lasting impression. He is voted “Canary of the 2019-2020 season by Iliane” by you, supporters of the Yellow and Green,” the club announced.

The Super Eagles winger’s nine goals across all competitions, including five Ligue 1 goals, eight assists is the highest in the team.

It is, however, unknown if the Canaries will sign Simon Moses after his eye-catching performances since joining the French club.

Osimhen and Moses’ performances will be pivotal for Super Eagles coach Gernot Rohr who recently signed a contract extension with the Nigerian national team.

Nigeria Football Federation (NFF) president Amaju Pinnick while announcing the contract said the German gaffer has been given a target of winning the 2021 Africa Cup of Nations and qualify the Super Eagles for the Qatar 2022 FIFA World Cup. (Guardian)