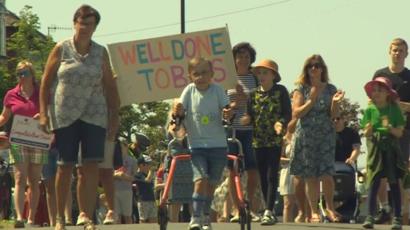 The whole street came out to cheer on Tobias Weller

A boy with cerebral palsy who was inspired by Captain Tom Moore to walk a marathon has said it felt “magnificent” to have completed his challenge.

Tobias Weller, aged nine, uses a walking frame and was only managing about 50m a day before lockdown began.

Well wishes cheered him on as he completed his challenge of walking 26.2 miles (42km) over 70 days on the street outside his home in Sheffield.

The youngster, who has been named Captain Tobias by his supporters, has raised £46,000 – smashing his initial target of £500.

The money will go to his two favourite charities, Sheffield Children’s Hospital and Paces School, which he attends.

Tobias, who also has autism and cannot stand or walk unaided, said: “I can’t believe I completed a marathon.

He added: “I love it when my neighbours clap and cheer for me and getting stronger and stronger every day is such a good feeling.”

Ms Garbutt said they were going to continue walking and would now aim to reach 50km.

She said: “He’s tried so hard all the way through. He’s really achieved a massive goal.”

Police closed off the Sheffield road where he lives as neighbours hung bunting and balloons for the final 750m of his fundraising effort.

England international Ms Morgan said: “You’ve done an absolutely incredible job so far to walk as far as you have and I know you’ve been building up and building up each and every day, which is amazing.”

Dame Ennis-Hill said: “I have been following your story and I just want to say I think you are absolutely incredible.”

The money raised will help The Children’s Hospital Charity through its emergency Covid-19 appeal and Paces School, a non-maintained special school where the ethos is on children being challenged to reach their full potential. (BBC)

Making Wheelchairs for Children with Cerebral Palsy Affordable and Accessible

Leroy Moore is on a mission to showcase African disabled musicians