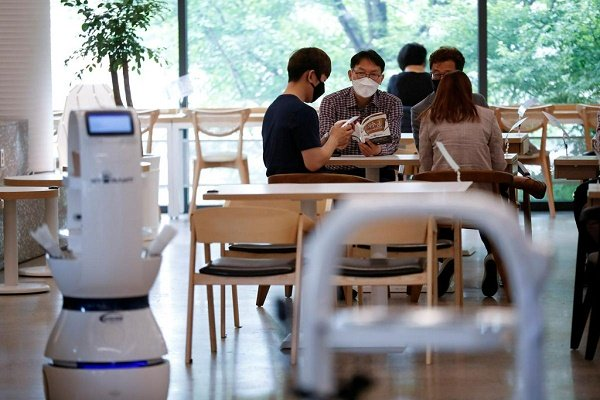 A cafe in South Korea has hired robot baristas as part of efforts to enforce social distancing while the world continues battling the spread of the COVID-19 disease.

According to Reuters, the cafe, situated in Daejeon, the country’s fifth-largest metropolis, deployed the humanoids after the novel coronavirus claimed the lives of 267 patients and infected 11,000.

It was gathered that the new technology, which uses a coffee-making robotic arm and a serving robot, can make 60 different types of coffee and serves the drinks to customers at their seats.

They are also said to possess the ability to communicate and transmit data to other devices while deploying their self-driving technology that calculates the best routes to ply around the cafe.

“Here is your Rooibos almonds tea latte, please enjoy. It’s even better if you stir it,” it routinely says as customers reach for their drink on a tray installed on the robot’s white capsule-shaped computer.

Unlike before, ordering six drinks from a kiosk was said to have taken seven minutes, with only one human employee, a patissier who indulges in cleaning and refills ingredients, at the cafe’s disposal.

Speaking on the new technology, Lee Chae-mi, a 23-year-old student who frequents the cafe, said: “Robots are fun and it was easy because you don’t have to pick up your order.

“But I’m also a bit of worried about the job market as many of my friends are doing part-time jobs at cafes and these robots would replace humans.”

The development comes at about the same time when Rwanda took the delivery of robots that “screens 150 people in one minute.”