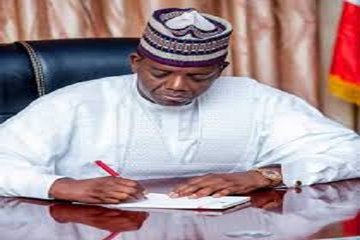 The Governor made this known when he hosted Labour leaders to break the Ramadan fast at his residence in Gusau the state capital.

Matawalle said his administration resolved to reduce the hardship being experienced in the state as a result of the COVID-19 pandemic and has directed for the supply of rice to be sold at 50 percent discount.

He also assured that there would be no cut in salaries as proposed by other Governors and called on the state civil servants to appreciate Government efforts in improving the welfare of the state citizens.

Earlier the State NLC Chairman, Comrade, Bashir Mafara thanked the State Governor for granting the subsidy approval to the workers and added that it was the first time civil servants witnessed such gesture.

PHOTO: Made in Kano COVID-19 Vaccine