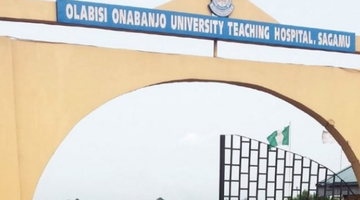 The association of resident doctors at the Olabisi Onabanjo University Teaching Hospital in Sagamu, Ogun state, has asked members to embark on a three-day warning strike starting from Monday.

In a letter to Dapo Abiodun, governor of the state, the association expressed displeasure at the way the state government has been handling the welfare of doctors.

The association accused the government of not responding to their agitations despite repeated calls.

It, however, said its members working at the COVID-19 isolation centre would be exempted from joining the strike action.

“The whole house is very much displeased with the government on issues that bother on our agitations and welfare. We are perturbed with the non-committal response from the government despite repeated calls and letters to get their attention,” the letter read.

“There has been no commitment whatsoever from the government on the issue of appropriate remuneration, entry-level, new minimum wage, hazard allowance and life insurance for our members.

“No response to the letter written by the National Body of the Association of Resident Doctors notifying Ogun state government on the aberration concerning the appropriate remuneration to her members at OOUTH.

“Despite the inadequate response of Ogun state government to the health risks confronted by our members during this COVID-19 pandemic, our members went ahead to continue their work diligently in their various departments and at the isolation centre.

“Following the three-day warning strike, we shall review the government’s response and appropriate action shall be taken thereafter.

“We have a human face and we know people are the basis of our practice as medical professionals. We shall, therefore, exclude our members working at COVID-19 isolation centre from joining the strike action. They shall not take part in the strike.”

Breakthrough cure for AIDS: HIV to be defeated with single injection — Study