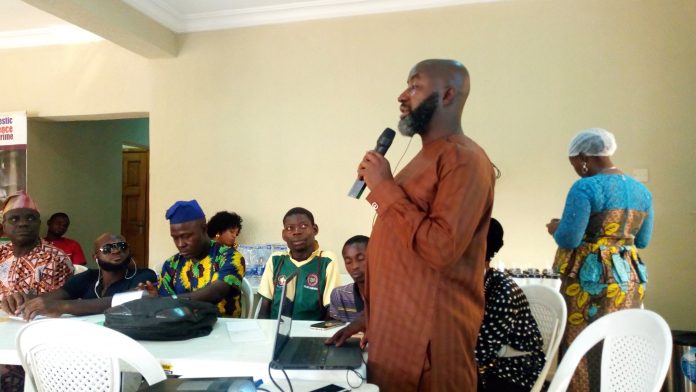 Lagos State Chairman of JONAPWD, Dr. Adebukola Adebayo who spoke on the plight of it’s members, notes that on a normal situation, life was not easy for people with disabilities hence, with COVID-19, and the consequences it has unleashed, life for them had become even worse.

He said that while the federal and state governments are taking palliative steps to cushion the effects of the worsening pandemic, PWDs are deeply worried that members of the physically challenged community are not being taken into consideration, given that no special provisions have been made for their welfare.

Among the sizeable population of PWDs, he said, are people with cerebral palsy, spinal cord injury, albinism, Down syndrome, the blind, deaf, among others, who should have been accorded special attention.

He said most of the members have continuously lamented that they have been left to their fate since the commencement of the lockdown.

Speaking on the plight of the PWDs, Dr. Adebayo, said nothing was being done for PWDs in the state, noting that no provision was made to cater for them during live broadcast to pass information on the pandemic.

According to him, “As I’m speaking with you, I just left my house with a colleague, and we are running after the state government to know what it is, they are doing for persons with disability.

“As I speak to you, we are unable to even access COVID-19 information being announced by the state. If you are watching your TV now, national programme aired on television is being shown but Lagos, which is the epicenter of this disease is not making any efforts, not even when we have approached them to say that we want to support them to do this, they are not partnering with us, they are not talking to us, so we are the ones running after them to see how we can be included in all of these and that is very, very sad,” he said.

Reacting to the issue of palliatives which the Lagos State Government said it would give to aged and vulnerable persons, especially the less privileged, Adebayo said he had not received any information regarding how to get the necessary palliative from the state government.

“I’m the leader of the community in the state; I’m not aware or have received any information.

“All my people are calling me; the most we have heard is that Lagos State is using the residence registration data to reach out to people. Some of my members have confirmed they have contacted them, but again it is not all PWD members that are captured in the database, so we cannot rely completely on that database for disseminating any relief material.

“If we have been engaged, we would have advised on the best step to take in that regard. We go out of our way to look for them despite the sit-at-home order by the Federal Government.

“We all know that PWDs are the most vulnerable because many disabilities are based on pre-existing health conditions such as albinism.You have those with various intellectual disabilities, spinal cord injuries, cerebral palsy and Down syndrome, among other conditions. COVID-19 can fester easily with such people and because they are human beings and they have right, it is good we are consulted to be able to fashion out ways to go about this,” the JONAPWD boss said.

Noting that information on COVID-19 was not accessible to the deaf and the blind, Adebayo said the numbers being displayed on TV was not being read out to them to understand and feel carried along.

“There are no sign language interpreters and even aids for the blind to see. There are a whole lot of challenges for persons living with disability.

“Ironically, Lagos State has a Disability Law and an agency that is set up for disability affairs. You can imagine what would happen in states that don’t even have a legal structure in place.”

Speaking in the same vein, founder of the Albino Foundation, Pastor Jake Epelle wondered why the government has not given adequate consideration to PWDs in its response to the pandemic.

He advocated that government should get members of the community either by phone or physical meeting and ask them simple questions of what they could do to serve their community.

“The truth is that I spoke with a top government official on the issue of people living with disabilities and his response was, ‘we didn’t remember to specifically do anything for persons with disability; what we are doing is general.’ I told him, what you are doing cannot be general because you don’t know our needs,” Epelle said.

He advised that in the production of information booklet, there should be a life screen for persons with albinism, audio for persons who are blind and sign language format for people who are hard in hearing.

“Do you understand that if persons living with disability contract the Coronavirus, it would spread like wildfire because they are already in unhygienic environment and there are situations many of them have their hands on the ground trying to push themselves? Do you know the social issues these would bring up? Already they are discriminated against, nobody wants to go near them; now people will be far away from them.

“These people who are already struggling to eat what are the government’s plans so that these people will not die of hunger during this lockdown?” According to him, people with albinism already have radiation problem which affects the immune system, not to talk of people who are down with malignant skin cancers, and if they expose themselves to this virus that would be the end of their case. “There’s one right now; if she drinks water you will see the water going through her throat. It’s a huge problem.

“If government is claiming that it has a plan for us let the officials show us the plan. Let me see one thing that is specifically for persons with disability that the government has done that relates to COVID-19. I’m not just a leader, I’m a frontline leader in the community, and if there’s anything they have done we would have known about it,” Epelle said.

He listed strategies that would help to address the issues of PWDs during COVID-19 emergency in the nation, adding that the first step is to reach the PLWD community with the information that they need.

He said: “We need to educate them in the language that they would understand and the format they would embrace. We need to think of how to use heads of clusters, heads of various sub-groups, and heads of various disability organizations, to reach their communities. If government brings them closer, gives them information that they need, gives them the tools they need to disseminate the information, this information will get
to the rural areas because most of our people are rural dwellers. They are in the villages.

“When this thing, God forbid gets to the villages it will wipe them off because there are no health care facilities. You can imagine that.

“Secondly, government should consider using three powerful institutions to reach them – the church, mosques and traditional religion. These spiritual leaders would empower them through the right medium of information dissemination.

Coordinator of Albino Foundation, Lagos State Chapter and President, Lagos State Albinism Society, Josephine Omolola, buttressed the claims made earlier by her other leaders in the PWD community, saying that there hasn’t been anything done by the government so far in terms of relief materials. She, however, expressed joy that so far, no case of positive COVID-19 test has been recorded among her members.

She pointed out that the Lagos state Chairman of JONAPWD, Dr. Adebukola Adebayo has been giving members feedback on their platforms as regards issues relating to COVID-19 and measures to cushion the effect on the populace.

Omolola implored the founder of Albino Foundation to collate all the names of people with disability, especially the less privileged one and indigent members that should be given some relief during the crisis period.

“Jake should do that as our president. He should take it up with the Federal Government concerning the relief measures and he should know how to send it to all the states he is coordinating. We have coordinators all over the states. We should make sure the relief materials get to the coordinators in each state and the coordinator will give it to the indigent members,” Omolola said.

Sexual violence: Women with disabilities are most vulnerable – Edo JONAPWD