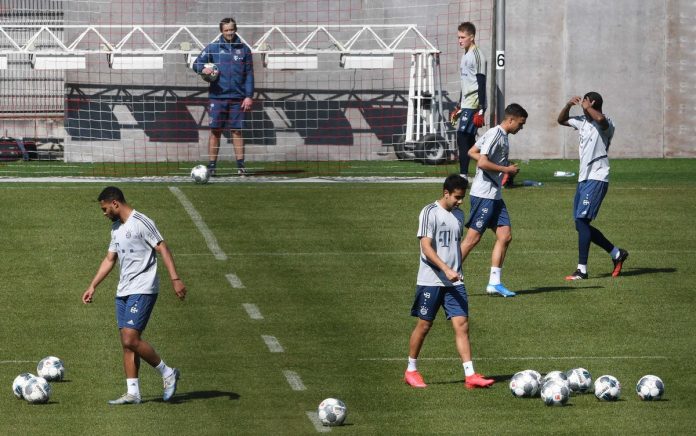 With players back practicing, the Bundesliga is set to become the first of Europe’s major leagues to return to action, with plans for spectator-free games starting in early May.

Germany is ahead of the curve. While other European soccer leagues are engulfed in uncertainty and damaging pay disputes between clubs and player unions, in Germany there is order and a cleareyed strategy to restart its league, which like others around the world was brought to a halt by the coronavirus outbreak.

This week, all the clubs in the top two divisions — 1. Bundesliga and 2. Bundesliga — returned to the practice field, observing local health protocols, but offering millions of soccer-starved supporters the surest sign yet that they will soon be able to watch the sport once again, and far earlier than fans in Europe’s other big leagues.

The Bundesliga’s chief executive, Christian Seifert, said in an interview that plans were being put in place for games to return at all 36 stadiums by the beginning of May, with the remaining nine games of the schedule to be completed by the end of June, a time when some of Europe’s other top leagues may not yet have returned from their hiatus. England’s Premier League, soccer’s richest domestic competition, is unlikely to return until July at the earliest.

But for all the optimism, it’s clear that one of the defining characteristics of German soccer’s popularity will be absent, and absent for a long time. Seifert said the usually packed stadiums — Germany has the highest average attendance figures in Europe — would be empty, as so-called ghost games are played out in cavernous arenas devoid of the usual carnival-like match-day atmosphere. Soccer will be a TV-only entertainment, and is likely to remain so until the end of the year, Seifert said.

Germany’s return to the field will be watched closely. All European soccer has been halted, with the strange exception of Belarus. FIFA is allowing an indefinite extension to let leagues around the world complete their stopped-in-time seasons.

“We are part of the culture in the country, people long to get back a short piece of normal life, and that could mean the Bundesliga plays again,” Seifert said. “This is why we have to play our role here, and that means to support the government and to talk with the government about when we will be able to play again.”

Germany has not been immune from the ravages of Covid-19. The country has the fourth highest number of recorded cases in Europe, with more than 107,000 by Wednesday morning, according to Johns Hopkins University. But its health care system has so far managed to cope with the crisis perhaps better than anywhere else in the world, with a death rate from the disease lower than even South Korea, a model for flattening the curve.

The Bundesliga, Seifert said, is conscious of not being seen to add to the burden on the health care system. Germany’s testing regimen, by far the best in Europe, means that supplies needed for medical staff will not be diverted so soccer stars can get on the field.

“It won’t be the case that one doctor or one nurse that is really relevant for the system cannot be tested because football players have to be tested,” Seifert said.

In working out a plan, the Bundesliga estimates that 240 people, including players, coaching and medical staff, match officials and production staff will be needed for each game. Two groups have been set up to deal with the practicalities of staging the game: one to set up uniform game day regulations and the other, perhaps more important, to devise a hygiene plan for training and games and to work out what measures to take if a player tests positive.

“The concept is to give certainty to players, to their families and to society as well,” Seifert said.

The virus has created havoc with the global soccer calendar. Europe and South America’s national team championships have been postponed by a year to allow domestic seasons extra time to finish. Seifert said finishing the German season as early as possible would also benefit UEFA’s efforts to complete its two competitions, the Champions League and the Europa League. Aleksander Ceferin, the UEFA president, said recently that those tournaments could not take place beyond August. The club season had been set to end in June.

“The sooner we are finished, the more flexibility we can provide to the European football landscape,” Seifert said.

The rush to return to the field is also borne of a financial necessity as much as an emotional one.

While its clubs are some of the healthiest in Europe, not finishing the season would lead to an enormous cost. Seifert put the figure at as much as 750 million euros, or about $816.5 million, a figure that compares to forecasts of one billion euros of losses in Spain’s top division, La Liga, and a minimum of one billion pounds, or about $1.24 billion, for the Premier League.

“For the moment, we are all fighting to survive,” said Seifert, predicting that 50 percent of the second-division teams were “very much in danger to file for bankruptcy,” if the season were canceled, while as many as five top-division teams would face serious problems, too.

Top-tier teams are certain to lose nearly 100 million euros from the absence of supporters, while the final, 300-million-euro installment has yet to be paid by domestic rights owners, the biggest of which is Comcast-owned Sky.

“We are in very constructive talks with all our partners no matter if it’s pay TV or free TV,” said Seifert, acknowledging the crisis has hurt television companies’ bottom lines as much as it has the soccer industry. He has made plans for a possible shortfall, which includes the possibility of taking a nine-figure bridging loan from private equity firms, like KKR and Apollo Global Management, which initiated talks. Seifert said he had hired an international bank to deal with those inquiries.

German clubs have largely not attracted big-money investors in the same way as the Premier League, where foreign billionaires and oil-rich sheikhs have poured money into the clubs. That’s largely because of a model that prevents commercial interests from owning more than 49 percent of a club. The crisis has led to suggestions that the regulation — one that is defended fiercely by fans but has long frustrated some club managers — may finally be about to be lifted. Seifert denied that was the case. “As long as I’m C.E.O. of Bundesliga, no one would discuss the 50+1 rule right in the middle of the coronavirus,” he said.

German clubs have managed to navigate the tricky issue of negotiating cuts to player salaries serenely, unlike in England where an ugly dispute among players, their union and teams has entered a second week. In Germany, where players and clubs negotiated directly, players at the biggest clubs have agreed to reduce their salaries by 20 percent to 30 percent and those at smaller ones by 10 percent. “To be honest, I didn’t understand the discussions in other countries because from the very beginning clubs were talking with their players about it,” Seifert said.

Seifert predicted that whatever the outcome of the next few months, one thing was for sure: The global $7 billion player transfer market is certain to collapse. Such a situation would have massive reverberations across the industry, particularly at clubs with risky business models geared to transfer market returns.

“In the short term, I would say the transfer market this summer will not exist, it will collapse,” he said. “Some agents will suddenly understand that they will have to work hard, or at least work; some leagues will understand that money is nothing that is coming automatically every month from heaven.”