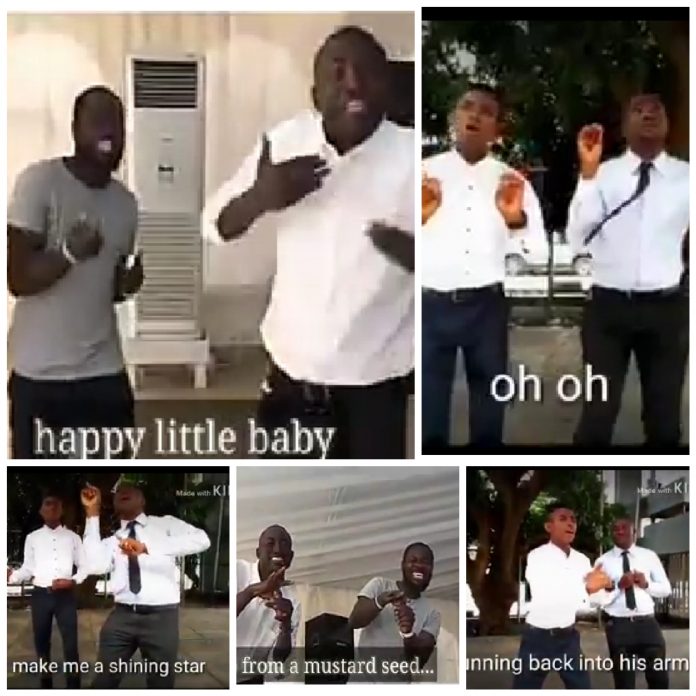 There is also a religious deaf group such as church and Muslim worshippers who learn to sing and praise their God using sign language. Some are so good that they can memorize a whole page or two and imitate the song from the page through sign language but that often happens in a church that involves only the deaf.

Imitating music lyrics and sound and translating them into sign language while the beat is ongoing has been a thing for most deaf people because they cannot hear the lyrics neither the sound of the music except for drum beats. But there is a group of people who though they are not deaf one will sometimes mistake them to be deaf. This group’s job is to “listen and inform” through sign language. They can stand for hours telling you what’s going on in sign language or what messages a speaker is trying to pass across to you. They are called “sign language interpreters”.

This group introduced something that started back in 2007 and is currently trending in Nigeria and some countries.

How it all started

Having learnt of this development, INN interviewed few members on how the idea came into being and what pushed them into it. These members were involved in developing the idea of interpreting trending music to sign language songs. One among them is Joseph Ameho, an interpreter at the University of Ilorin and a member of Children of Deaf Adults (CODA).

According to Ameho, “This started in my mind when I was small and met Adejuyigbe Daniels a.k.a Mighty D (Deaf), he could sing popular West Life songs and I was amazed that he could, as I was still a little young and know little about the deaf even though my parents are Deaf and I have two uncles and Cousins that are deaf.”

“I then realized that it is not all deaf that can hear these songs so I resorted to signing songs to the pleasure of the deaf people. I termed it Signsongs. I stopped after I realized that I would need permission for some of these songs, but then came along James Samuel, an interpreter and close friend, we did some songs together and I did some solo signing to some songs before leaving Nigeria. I still do some songs here in my free time.”

Samuel James, a professional sign language interpreter, entertainer and an expert in deaf Performance Arts told INN how he found himself with Joseph Ameho in a deaf camp and used the opportunity to try out the idea. “I think I will call the type of Sign Language Music I do ‘interpreting’ and not ‘translating’ as it goes beyond the lyrics of the music being signed.”

“It all started in the year 2007, I and a friend (Ameho) found ourselves at a deaf camp and we were given an opportunity to showcase whatever we intend to showcase to the deaf congregation that was how it all started. We had a mutual agreement on the choice of music which was ‘Olori Oko’ by Infinity; it was released that same year and was really popular.”

“We rehearsed the song for minutes and made the presentation. It was not so well appreciated by the deaf people at that time that it gave me a serious push to continue in this trend. Back then phones were not as common as we have now, so it was just for that particular audience at that time. I can’t forget that day. So since then, I do music in sign language as often as I get the opportunity.”

Olaoluwa Bayonle Emmanuel, a Sign Language Interpreter, Special Educator, Sign Language Artiste and an Advocate for the deaf in an interview with INN said “I never thought of translating songs into sign language. But I have passion for music and I knew I am endowed with some parts of music but I can’t sing because I don’t have a singing voice. Also I can sign and I have related so deeply with the Deaf community in which I am so flexible using their language and I am used to the Deaf Culture. I know they love music and some sing too, but they can’t hear.”

“Again, I saw some people doing this while I was starting and thought I will do well contributing my gifts to the industry, express music to the deaf people without voice and creating more awareness about inclusion.”

What Inspired the Idea

James Samuel said, “One of the audience that day was Hellen Beyioku-Alase, she marveled at the presentation and came to express this personally to us, so I remember her comments vividly, she pushed for more of it back then too.”

Bayonle, a solo music translator said “I can say what pushed me was the quest to manage my skills (Signing and Signing skills), making it productive while adding values to lives and playing a part to ensure inclusion for all through music.”

Joseph Ameho further added “Yes personally. I also think plenty of Interpreters are also venturing into sign songs, and this is good. It will be okay if the musicians themselves can employ the services of an Interpreter. This will make the interpreting pure and well presented.”

Bayonle said “I look forward to collaborations and music videos having some sign language content in it that carries everyone along and by that there will be more awareness about persons living with deafness and disability in general”.

James Samuel added “The future is here already! A plan is out already, implementation process is where we are now. A massive project will come to life this year that showcases the aesthetic musical and the dramatic aspect of the Deaf in a grand stage performance. Seams Consults working in collaboration with Friends of the Deaf Foundation and some other organizations will be bringing to the stage for the first time in Africa; Deaf Artists, Dramatist and Skilled Sign language Musicians for the largest Deaf Entertainment project in Africa watch out!” Watch this space.

Why 99 Percent Of My Staff Are Deaf- Entrepreneur, Stanley Ozuruah