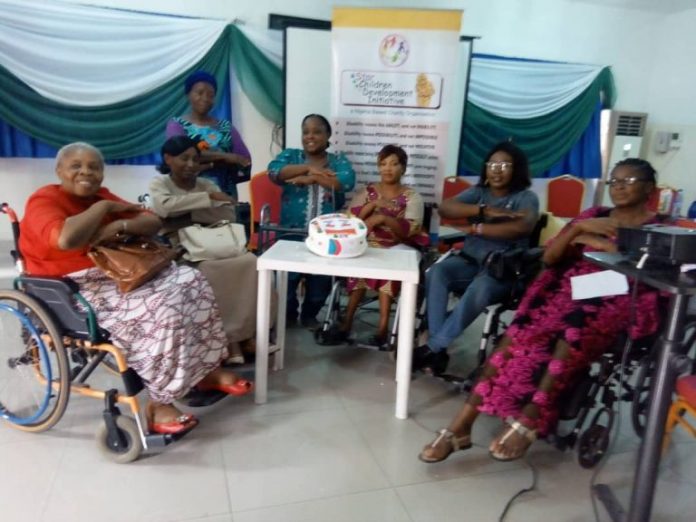 Star Children Development initiative, a non-governmental organisation (NGO) has embarked on measures to reduce poverty among the Persons with Disabilities (PWDs) in Lagos.

Manager of the NGO, Mrs. Adelani Fadeola while speaking with the journalist over the weekend said that the month of March has been mapped out to celebrate women across the world because women are unique, beautiful and special with a lot of talent.

She said the organisation has been holding the program for over five years now for persons with disabilities is to assist them to be useful to the society and not be a liability as well as help reduce poverty among themselves and society at large.

According to her, “Persons with disabilities are being neglected, people tends to forget them in the scheme of things due to stigmatization and discrimination. Persons with Disabilities are humans, some of them are married with children and many of them have excelled in different endeavors.

“It is always during awareness program that those with talents was discovered, initially all these talents are hidden, it is programs of this nature that we discovered some of them. Government should support and assist them with capacity building and grants/loans to boost their businesses.”

One of the speakers, Mrs. Foluke Ademokun spoke on the topic: Disability Gender-Based Violence: Protecting Women and Girls with Disabilities in Nigeria.

In her speech, Ihuoma Sussan Kelechi, noted that people do not speak out in term of physical and domestic violent, expressing worry that the awareness is still low.

According to her, over 80 percent of person with disabilities abusers are very close to them.

“Right inside with them, people do not understand that our abuser is right with us, these are issues we face on daily basis, it is problem without protection and nobody wants to understand us. I am an adult with disability as a result of Polio.

“Most times, terrible things happen to us, due to culture which is another problem on its own, our abuser keep abusing us physically, emotionally, financially and we keep quiet, we do not let people know about it because they are closed to us.”

Narrating her ordeal while growing up as a child, she said, “I suffered domestic violence so the kind of conversation pertaining Gender Based Violence that I am hearing makes me feel bad and psychological down. There is little or no awareness and as such many Persons with Disabilities are tagged by their families as liabilities or evil in some cases.

“I joined the campaign to enlighten the public that PWDs need to be equipped with skills so that they could have access to available opportunities. Our major challenges are infrastructural barrier so it needs urgent attention, with policies that will work to protect and also deserve social protection and if it is implemented.”

She lamented that despite the fact that a Disability Law exists at the national level, implementation was non-existence.

She said only Lagos State has made attempts on implementing laws concerning PWDs, wondering that if the Federal Government fails to implement the act, those who ought to benefit cannot do so.

“I am living with person with disability, so I understand disability, government should not abandon them, I’m appealing to them so that they should rethink and reconsider them in any subsequent job,” she said.

Also speaking, at the event, a brand Ambassador and Coordinator, Star Children Development Initiative, Assumpta Khalin, said they seized the occasion to celebrate women with disabilities on international Women’s Day and also reiterated the commitment of the foundation which is to ensure that persons living with disabilities are not at a disadvantage in the society due to their condition.

“With the support from Zenith Bank Plc. since last two years, many have benefited with grant to boost their businesses, we will continue to do our best and utilize the grants well.

“While we are still appealing with other relevant stakeholders to support persons with disabilities to break the barriers, government could do what it is expected of them, the society is collaborating in that process, poverty among PWDs would be greatly reduced. Even those who beg for alms along the roads would also be positively impacted,” Khalin said.

RedAid Nigeria partners with Enugu state government and others to provide...

JAMB Calls For Establishment Of More Centres For The Deaf