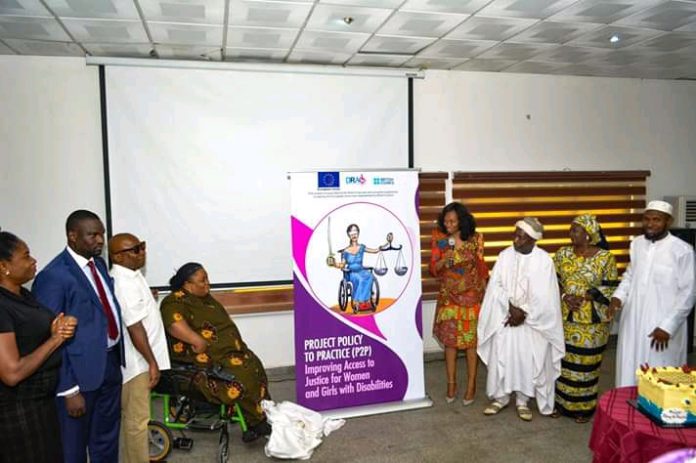 The Disability Rights Advocacy Center (DRAC) has activated plans to ensure that more women and girls living with disabilities have access to justice.

Executive Director of DRAC, Dr. Irene Patrick-Ogbogu who disclosed this at the inaugural launch and meeting of a new project known as Project Policy to Practice (P2P) said the initiative is based on the need to improve access to justice for Persons with Disabilities (PWDs) especially women and girls with disabilities.

She said the project, supported by Rule of Law and Anti-corruption Programme and funded by European Union and implemented by British Council, was a product of a research conducted by DRAC in 2017-2018, where persons with disabilities human rights are violated and they are unable to access justice because the facilities where they can access justice are not accessible or disability friendly.

“There is no physical access, environmental access, the wrong attitude of the service providers, and absence of protective policies. Women and Girls with disabilities suffer extreme forms of violence and they are unable to access justice, which is as a result of negative comments, and attitudes which they usually get when they make effort to report cases of violence against them. Even in the case of rape, they have had a lot of humiliating experiences, she said.
Speaking further, she said that the inaugural meeting was to help all stakeholders understand their roles towards ensuring access to justice.
She highlighted the fact that protective laws such as VAPPA Act, Child Rights act and the Disability Act can be used to access justice for persons with disabilities but they are not being implemented using a disability lens, thus resulting in the barriers PWDs face.

She expressed optimism that P2P will work to bring these laws to life and ensure that they move from being just policies to becoming the standard practice. “P2P will also look at the range of justice services and support the service providers to improve on their services to accommodate PWDs,” she added.

Also speaking, Component Lead (Civil Society and Media component of ROLAC), Oluwatoyosi Giwa, in her goodwill message said one cardinal focus of ROLAC apart from their support for anti-corruption drive of the government is access to justice for the most disadvantaged groups in the society particularly women, children and PWDs.

She said that ROLAC was looking at existing legislation for these groups, with a plan to identify what could be done to support government at all levels to implement these protective legislations and promote the specific roles of different groups and individuals to ensure that PWDs have access to justice.

She urged stakeholders present not to look at the government as the only service provider or the only problem, we should contribute our own bit towards ensuring that access to justice for PWDs especially WGWDs is achieved.

On his part, the representative of Nigerian Bar Association (NBA) Emmanuel Adedeji, commended DRAC and ROLAC for the initiative while he blamed the problem on the failure of Nigerians to engage laws that are meant to serve and protect them, instead they continue to suffer what the law sought to prevent.

He assured DRAC of the NBA’s support and willingness to be a part of any initiative that seeks to enhance access to justice for PWDs.

FCT chairman of Joint National Association of Persons with disabilities (JONAPWD), Mr. Ujah Abdulmununi, also commended DRAC, said that the project is coming at the right time because lack of access to justice for PWDs is posing a lot of challenge for PWDs. He urged all stakeholders to rally around PWDs to ensure that the set goals and objectives of the project are achieved.

The Executive Director, Women Africa, Mrs. Chinwe Onyeukwu in her goodwill message described access to justice of PWDs as a critical challenge facing persons with disabilities especially women and girls with disabilities because findings have shown that women and girls with disabilities are more vulnerable to violence. In most cases, they don’t get the services they deserve due to the attitude of the service providers. She urges all stakeholders to contribute towards ensuring that by the end of the project, a reasonable progress on the access to justice of PWDs must have been made.

Deputy Director, National Human Rights Commission Aisha Katungo in her goodwill message said that access for justice is one of the cardinal principles of rule of law, if you cannot access justice, you cannot express your feeling and you cannot challenge the decision makers and hold them accountable for their actions / inactions. She expressed the commission’s willingness to partner with DRAC on this project because it has to do with the promotion of rights of PWDs with special focus on women and girls with disabilities.

Highlights of the event was the presentation of the P2P overview by Dr. Patrick-Ogbogu just as she gave the background of the project, the scope, goals and objectives, project components and expected outcomes.

The event also witnessed the official launch of Project Policy to Practice (P2P) when the special banner was unveiled by Toyosi Giwa of ROLAC and the project inception cake was cut by the Executive Director of DRAC, ROLAC representative and other stakeholders at the event.
Among those in attendance include traditional leaders from the six-area council, leaders of the disability community, CSOs, Government officials, Professional organizations like NBA and Religious leaders.

INEC to deepen participation of PWDs in future elections

Disability Bill To Be Forwarded To President Buhari With A Commission-...