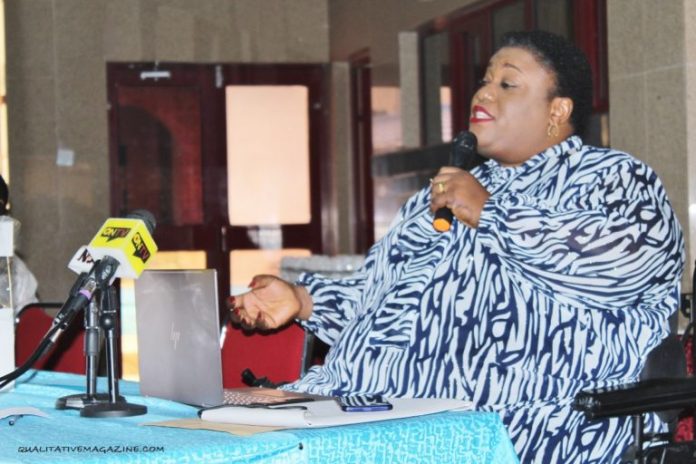 BTC is supported by DFID through CBM UK and will focus on tackling violence primarily through supporting women and girls with disabilities to become socially, politically and economically empowered. In order to facilitate empowerment, the project will work in five key areas that include: Education; Community Inclusion; Socio-economic Empowerment; Leadership; and Civil Society Synergies. The Project will be implemented in the six area councils of the FCT, and Karu LGA in Nasarawa State.

The Executive Director, Dr. Irene Ojiugo Patrick-Ogbogu in her opening speech while thanking participants for showing up to participate, said that BTC plans to empower women with disabilities in all aspect of their lives – education, economic empowerment, political participation, etc, as the project is focused on breaking the drivers of discrimination and violence that women and girls with disabilities experience in our society.

She said that it is a known fact that people with disabilities in our society continue to suffer discrimination and exclusion, with women and girls with disabilities affected three times more than their non-disabled counterparts, on the basis of their gender, their disability and because they are amongst the poorest of the poor in our society. Most often, the society doesn’t pay attention to those barriers that exclude persons with disabilities.

She went further to express joy over the support received by DRAC to execute this project and is hopeful that at the end of the 3 years of the project in the six area council of FCT and Karu LGA in Nasarawa state, women with disabilities will be more visible, have a stronger voice and would be more economically and socially empowered leading to improved access to education, employment and other socio-economic opportunities.

The country director of Christofel Blinden Mission (CBM), Bright Ekweremmadu in his goodwill message said that CBM has been working in Africa and Asia for over a 100 years and inclusion of persons with disabilities is at the heart of what CBM do and what CBM preach. He expressed sadness that PWDs are not strategically remembered and included, rather they are usually an afterthought.

Speaking on the project ”Break the Cycle”, he described the project title as the best he has come across in his over 35 years of development work, explaining that it is geared towards breaking the cycle between poverty and disability as well as violence and disability and the most important part of the project is that it is focusing on two groups that are naturally disadvantaged i.e. women and girls with disabilities. He concluded by saying that the project is aimed at ensuring that women and girls with disabilities are remembered, empowered and able to live their life in full like others.

The representatives of various MDAs, Religious and Traditional Leaders, Save the Children, INEC, National Association of Blind (NAB FCT), Disability Rights Fund (DRF), Social Development Secretariat, FCT Association of the Deaf, and others in their goodwill messages, commended DRAC for the initiative and pledged their support and commitments towards ensuring the success of the project.

The highlight of the event was the project launch which was demonstrated by cutting of the project cake officiated by the representative of Hon. Minister of Education, in the company of representatives of INEC, Save the children, DRF Program Officer and Executive Director, DRAC, among others.

Qualitativemagazine reports that there were technical presentations on the overview of the project as well as the project components, expected outputs and outcomes by DRAC staff which preceded stakeholders group work to identify their roles and responsibilities. The different stakeholders ranging from Education, CSOs, DPOs, Communities, Government were grouped to work on the components of the project such as Leadership, Civil Society, Community and Education.

Executive director of DRAC in her closing remarks called for commitment of the various stakeholders because DRAC cannot do it alone. She emphasized on the support of the community leaders because it is a community-based project, therefore the leaders must play an important role in making the project a success. They should assist to identify the right beneficiaries within the communities to ensure that the project is impactful.

The Break the Cycle (BTC)Project is supported by UKAID and CBM.