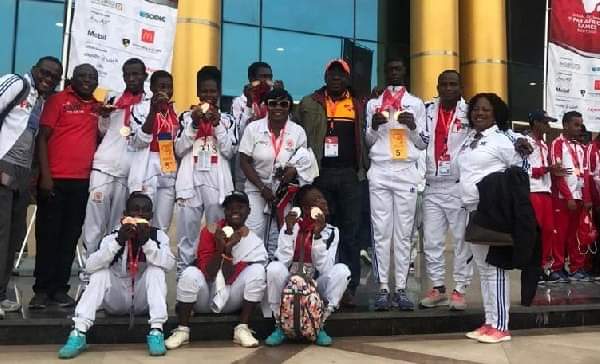 The Director General of the National Sports Authority (NSA), Professor Peter Twumasi, has promised to reward the Special Olympics team with GHC10,000 (about ₦668,500 exchange rate) for winning 16 medals at the just-ended 2020 Pan African Special Olympic Games held in Egypt.

The football team added a silver to the medal haul after losing 0-1 to Algeria in the final at the Military Stadium in Cairo on Wednesday January 29.

When the team presented their medals after arriving in Ghana on Friday January 31, the NSA boss said he was overjoyed at the outstanding performance of the athletes, describing the feat as gains for Ghana at the international level.

He commended them for flying the flag of Ghana high and assured them of financial support in future assignments.

A Board Member of Special Olympics Ghana, Nana Wereko Ampim-Opoku, told the Graphic Sports Online that but for financial constraints, Ghana would have won more medals.

“Special Olympics has always had difficulty in mobilising funds to participate in such international tournaments, so we always go with a few athletes.

“The team depends solely on the board, so if it does not put resources together, we cannot participate in such tournaments,” he explained.

He added: “Ghanaians have now shown much appreciation for the outstanding performance of Special Olympics Ghana after our feat in Cairo at the just-ended Pan African Games.

“They have also shown appreciation to the board for nurturing the potential of intellectually disabled athletes through sports over the years.”