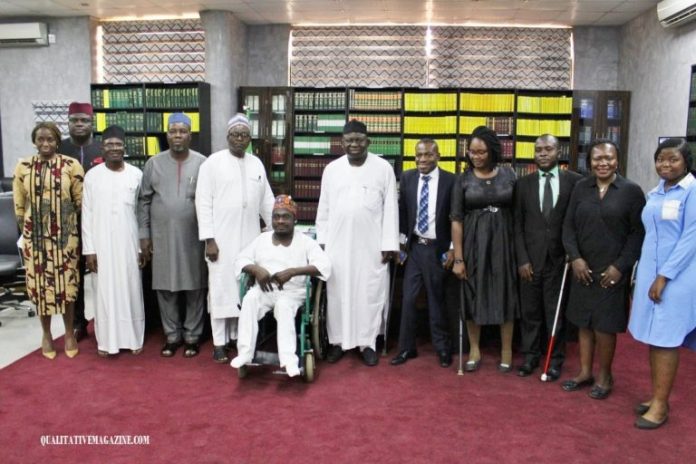 Association of Lawyers with Disabilities (ALDIN) had paid a working visit to the President of National Industrial Court, Hon. Justice B.B. Kanyip and his team on Friday, 17th January, 2020.

INN gathers that the visit lead by its National President, Barr. Daniel Onwe with support from Disability Rights Fund (DRF), Boston, USA was to promote inclusive justice service deliveries and employ lawyers with disabilities as judges among others.

Speaking on behalf of the Association, Barr. Daniel Onwe explained that the existence of the organization is necessitated by the fact that persons with disabilities are usually not put into consideration in the scheme of affairs in the society hence their interest usually come as an afterthought. For instance, public buildings are usually constructed with steep flight of steps, without considering that there are people on wheelchairs and crutches, those there are blind, deaf and other persons with other disabilities who would requires peculiar format of communication. Therefore, persons with disabilities are abandoned to their fate.

“Our courts of justice are not fair to persons with disabilities. Court building and environment are very inaccessible to persons with disabilities. Persons with disabilities who come to the courts, either as counsel or litigant are face with untold hardship, and this could be very demoralizing. Persons on wheelchairs, for instance, can only access most courts by they either crawling on the floor or being carried like babies into the courtroom. There are several blind persons who have defied all odds to become lawyers, but the courts seem to close its doors to them as the basic assistive facilities to cater for their peculiarities are conspicuously absent. We have deaf persons who have taken their destinies in their hand to go to school and trained to become a lawyer. And then they face a brick wall in the profession, as there are no sign language interpreters provided to communicate with them in the courts. These practices are unfair, unjust and unequitable for lawyers with disabilities.

He put it at the door of the National Industrial Court because the Court has peculiar jurisdiction to promote equity, fairness and international best practices. It would be equitable, fair and just to create a level playing field for persons with disabilities in the buildings, environment, practice and procedures of the National Industrial Court. Creating level playing field for persons with disabilities has now become a global trend. And Nigeria cannot afford to be an exception. National Industrial Court has so much role to play in upholding the rights of persons with disabilities in Nigeria. It is the court constitutionally vested with exclusive jurisdiction in matters related to labour, employment, unfair labour practices, international best practices in labour, and disputes arising from discrimination.

Qualitative Magazine reports that Barr Daniel had submitted that National Industrial Court in the exercise of this special jurisdiction, should always be mindful of the undeniable fact that persons with disabilities are always victims of covert and overt discrimination in the labour market; the labour environment and practice are most unfair to persons with disabilities. For instance, how can we explain the case of persons with disabilities, who scales through all recruitment interviews and test and possess the essential competencies for the job in question, only to be denied employment just for the reason that they are persons with disabilities? What do we call the situation whereby a lawyer on wheelchair is faced with practicing in courts with sharp flights of steps, but without suitable elevators or ramps? How can a lawyer with disability be crawling in and out court and still fairly compete with other lawyers for patronage?

His lordship Hon. justice B.B. Kanyip in his response expressed happiness hearing from the group and commended the group for their good job for articulate all the recommendations (which were all in line with recently signed disability right Act). He assured them that to the extent that it lies on them and subject to the availability of funds, he will grant ALDIN’ requests almost immediately. On the reservation of parking lots, he assured that it be implemented both at the headquarters and all the judicial divisions. On appointment of lawyers with disabilities as judges, he said that the starting point is for lawyers with disabilities to make themselves available by applying when there is recruitment.  He said the proposed Practice Direction, will be considered for adoption. Furthermore, he advised ALDIN to review the current National Industrial Court Rules and proposed areas of possible amendment to accommodate peculiarities of disability. He also requested from ALDIN details of a sign language interpreter for engagement by the National Industrial Court as the need arise.

Meanwhile, INN gathers that National Vice President of the Association, Barr. Edeh Catherine while giving the final address stressed the need for the judiciary and judicial system to lay precedents and set the pace by ensuring inclusive structures, facilities and justice system so that they can effectively administer justice over persons and institutions that will violate the provisions of the Disability Act.

Catherine also noted that she is neither the first nor the second homebred deaf lawyer Nigeria would produce, stressing that there are many already, unlike several African countries who many years enacted their disability bills into Act. “Till date, most of these countries have not produced even a single deaf lawyer. But Nigeria has many. And they were ‘made in Nigeria’ Yes, Home-Bred. This however does not mean that Nigerian government is doing up to half of what governments of these countries are doing for their people.”

“Our only advantage is that we breed some calibre of resilient, dogged and indefatigable citizens who despite the nonchalant attitude of government are determined to build a better future for ourselves, the little ones who look up to us, and generations to come.”

She further noted that the association however have certain public and private institutions who have on their own, been supporting and promoting inclusive growth in Nigeria without any budget from government for such and that it is because of the efforts of these few institutions/bodies such as her alma mater the University of Ilorin that people like her are where they are today, contributing to the inclusion discourse.

She pleaded that the issues should not be deferred to a later date in future, rather prompt and proactive actions should be channelled to ensure effective implementation.

ALDIN will in the coming weeks be engaging other Courts Heads in Nigeria. This part of the project ALDIN started running last year, with the support of the Disability Rights Fund. And the project is targeted at making the justice administration system accessible to persons with disabilities.

Palliative Measures: Government Has Failed To Include Deaf Women – Beyioku-Alase